Backyard Farmer in August launched a Kickstarter campaign to raise $150,000 to finance development of its new farm just off Nine Mile Road. The company, a co-op of ecologically minded farmers, contractors, carpenters, handymen, tree cutters and stoneworkers, bought the 30-acre tract of land in June for $125,000. The collective’s savings financed the deal.

“We started from nothing and have thrived,” co-owner Sean Sheppard said. “We’ve never been in debt and never had to take out a loan. We bought the farm to show how far we’ve come.”

The company brings in about $50,000 each year from member fees and a percentage of what it charges for corporate team-building events. Backyard Farmer does not contract services but offers a brand that generates referrals for its members. 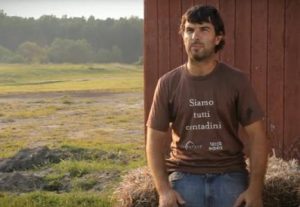 Sheppard said money from the campaign would speed the realization of a farm that would provide organic produce wholesale to local restaurants, be accessible and function as an educational resource for Richmond.

“If we get this money, we will be able to install ADA-compliant walkways and bathrooms,” Sheppard said. “We’d be able to provide services to incubate new businesses, increase our service base, which would create jobs, and be able to give workshops to the public.”

Backyard Farmer is offering incentives including calendars, seeds and fruit trees in exchange for donations to its campaign. With an October end date fast approaching, the group has received less than 5 percent of its goal.

“I’m an eternal optimist,” he said. “Even if it’s the last week of the campaign and we’re still at where we are now, I’m still going to think it could happen.”

Sheppard said he launched Backyard Farmer in Williamsburg in 2007 and moved the company to Richmond in 2008.

The co-op began, as the name implies, by installing gardens in backyards. In the past year, the company has evolved into the network of contractors it is today. Its members offer landscaping and carpentry services and engage in educational outreach at a dozen Richmond schools, Sheppard said.

Members share the cost of rent and have access to the group’s facilities, tools and referrals for jobs. Backyard Farmer has about 700 clients in the Richmond area.

“We welcome anyone with skills and who shares our emphasis on doing things as locally sourced and ecologically conscious as possible, but we also don’t want to get too big,” Sheppard said.

Backyard Farmer also leases from M&E Realty a 10,000-square-foot warehouse at 1730 Rhoadmiller St., where it has its metal shop, wood shop, show room and offices.

The co-op has 11 members. Four of those are co-owners of Backyard Farmer, three are members launching their businesses, and four are there to make use of the space and tools Backyard Farmer offers, Sheppard said.

In an effort to drum up support for the online fundraising campaign, Backyard Farmer is hosting a party with food and music on its farm Sept. 28 from 4 p.m. to 8 p.m.

The organization eventually would like to turn the Henrico farm into a vocational and technical school for sustainable agriculture in the vein of the Rodale Institute in Pennsylvania, Sheppard said.

“There is nothing wrong with going to a pumpkin patch and picking out a pumpkin,” Sheppard said. “But we want the kids to come to the farm and be the ones who fertilize the soil, plant the pumpkin seed, understand how it grows and then pick it.”