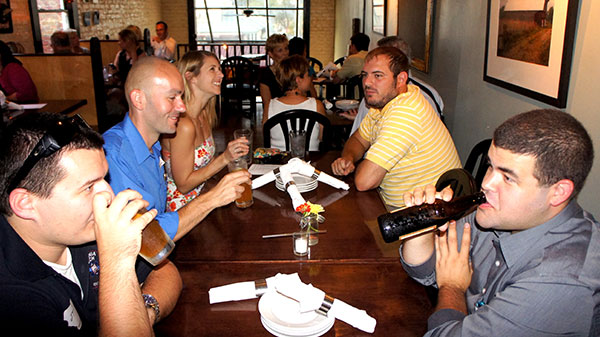 Participants in the inaugural Richmond Dishcrawl at Mezzanine. (Photos courtesy of Melanie Bianco)

San Jose, Calif.-based Dishcrawl set up shop this summer in Richmond to organize tours through the city’s culinary hotspots.

The company in June hired Melanie Bianco to organize, market and lead restaurant tours in various neighborhoods. Her first run was an Aug. 15 tour in Carytown, and a second Dishcrawl is slated for Sept. 24 in Shockoe Bottom.

The three-year-old company has employees in more than 30 cities across the United States and Canada. They take participants on walks that stop at four neighborhood restaurants. 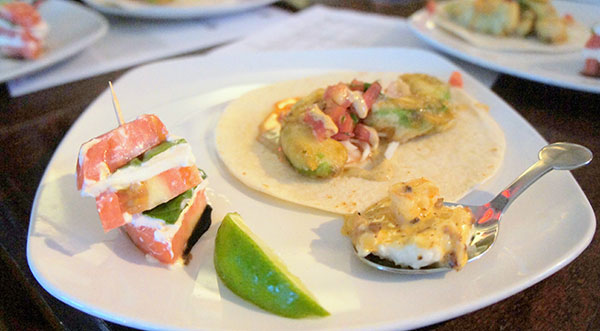 A plate offered to diners at Mezzanine.

“Richmond is a small city with a big-city palate. Restaurants around town are on the same caliber as those you can find in larger cities like D.C., L.A. and New York,” said Dishcrawl brand manager Caitlyn Williams.

Tours are offered about every five weeks and cost $45 each. The ticket includes a fixed menu and the chance to rub elbows with restaurant owners and chefs.

Dishcrawl makes its revenue off of ticket sales and negotiates food prices with each restaurant it visits, Bianco said

Bianco chose Carytown for the inaugural Dishcrawl because it is “a unique location in Richmond, it is possible to do four restaurants in one night and it is safe to walk at night,” Bianco said.

Although the first event did not sell out, Bianco was pleased with the experience.

The upcoming tour in the Bottom has sold more than half of its 40 available tickets. Building suspense is part of Dishcrawl’s marketing strategy, so the restaurants have not been disclosed.

Bianco, who moved to Richmond in summer 2012 and works as a server at a local restaurant, said marketing has been the biggest challenge in growing Dishcrawl. With nothing in the budget for advertising, she relies on social media and word of mouth.

“Every chance I get, I talk to people about Dishcrawl,” Bianco said. “It’s a work in progress, but I think if I can get people to be intrigued, with time it will be really good.”