A portion of a New Kent County real estate development, still trying to pick up steam after the downturn, could be headed to auction.

The county is eyeing about 180 acres that make up the commercial section of New Kent Vineyards as the parcels’ owner is behind on millions of dollars in infrastructure bond payments.

After more than two years without payment, the county this month took the initial steps to potentially force the property to auction. It hired local law firm Sands Anderson to post public notice that the Farms of New Kent LLC, tied to developer Nathan Shor and a partner, is delinquent on the bond payments. 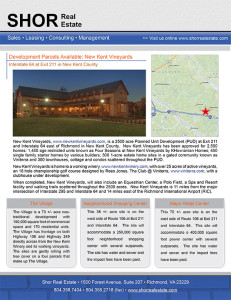 About 750,000 square feet of commercial space is envisioned for the acreage, which sits near the development’s New Kent Winery.

Should it get as far as an auction, proceeds would be used to repay what’s owed to bondholders, made up mostly of institutional investors.

But both the county and the developer are looking for a more positive resolution.

“Everybody’s hope is the development continues to improve,” said Dan Siegel, an attorney with Sands Anderson representing the county. “We’re trying to be as helpful as possible to make sure this works. But when it comes down to it, we have to collect [the bond payments].”

More than $2 million is owed in bond payments, Siegel said.

Shor, who runs Shor Real Estate, said he and the other landowners within the development continue to push for a restructuring of the community development authority bond payments system, through which the county collects payments and passes them on to the bondholders.

“All parties involved want to work together to ensure the success of New Kent Vineyards,” Shor said. “Nobody wants a foreclosure situation.”

New Kent Vineyards, near Exit 211 off Interstate 64, is a partially developed 2,500-acre plan that includes the Club at Viniterra golf course and the New Kent Winery. It was conceived amid the real estate boom, when many developers rushed to the rural county as the next bedroom community for Richmonders.

The bond payments, known as CDA special assessments, go toward repaying debt that was floated before the recession to cover the costs of infrastructure in and around the development. Developers agreed to make the payments to get the costly infrastructure in place.

Although the golf course, winery and some homes are up and running, residential has been slow to develop there, and the commercial piece has sat largely dormant.

“We’re all reacting to an economy that is still just plugging along,” Shor said.

The good news, he said, is that there is some momentum returning on the residential sections of the development.

Sales of lots and homes – and the resulting new residents – are the ingredients the commercial piece needs to get back on track.

“The days of retailers pioneering on these types of sites, for the most part, is nonexistent,” Shor said.

There are separate owners and developers on each portion of New Kent Vineyards. And the delinquency on the commercial portion is not tied to the golf course, winery or other sections.

“Everything is still operating,” Shor said. “There is nothing that’s going to come to a halt.”

The developers and the bondholders have had to find compromise in the past. Two years ago, the bondholders agreed to restructure the payments as the project had stalled and wasn’t producing the revenue needed.

Shor said it’s premature to say what concessions might be asked for this time around.

Siegel said it’s up to the bondholders whether they want to restructure again. Any new landowner would still have to make payments over the life of the bonds.

In the meantime, Shor said he and his partner continue to entertain ideas for the commercial land, including developing it themselves, selling it, or perhaps going in on a joint venture with another developer.

The next step from the county’s perspective would be to file a lawsuit to gain permission from a judge to auction the land. Should a resolution not be reached, an auction date would be set.