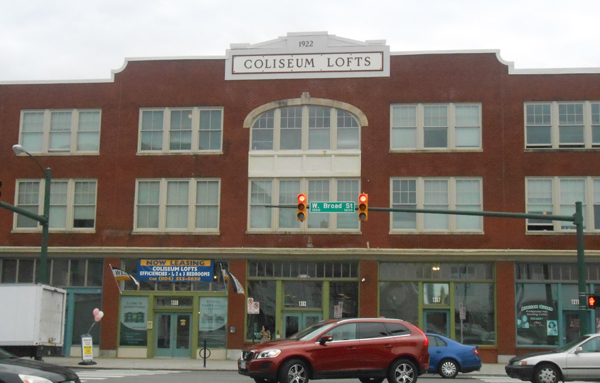 An apartment complex in the heart of Ram Country has hit the market.

The Coliseum Lofts, across the Siegel Center on Broad Street, are being shopped around with an asking price of $14.5 million, according to Chris Chadwick, a Marcus & Millichap broker marketing the property. The 123-unit mixed-use building is an early historic tax-credit rehab project owned by Main Street Realty.

“We renovated it 13 or 14 years ago,” Main Street President Brian White said. “VCU has done a great job in bringing that part of Broad Street along – it wasn’t as nice an area when we initially developed it as it is now.”

The property was listed last week. White said 119 of the building’s units are leased, with one residential vacancy and three vacancies in first-floor part-commercial, part-residential units. Apartments range from efficiencies to three-bedroom units, with rents from about $750 to $1,850. The first floor spaces average about $1,100.

The building adds to an already deep pool of apartment properties up for sale near VCU. The Home Brewing Co. building on Clay Street went under contract in August in a deal that also includes a 12-unit building at nearby Kinney Street.

Developer Ron Stallings put a portfolio of eight Jackson Ward properties, a triplex in Carver and an 18-unit Barton Avenue apartment building on the market in May.

And Clachan Properties has 198 units among nine student apartment buildings on the market.