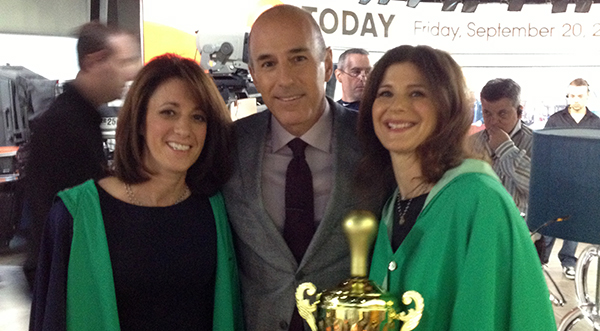 With its first year in business wrapped up and some TV exposure under its belt, a local startup is looking to tackle a new customer base: female football fans.

Rainraps, a Richmond apparel company founded last year by Stacy Struminger and Rachel Teyssier, recently launched a line of its fashionable waterproof wraps in the colors of NFL and college football teams, complete with extra coverage to protect against stadium seating.

Struminger and Teyssier created Rainraps to help women avoid bulky raincoats. They started with four colors; with the addition of the football-themed line, they’re up to 20.

Struminger and Teyssier said they sold about 5,500 units in their first year, amounting to about $250,000 in sales. They expect to sell twice as many units this year.

With no employees other than themselves and no money spent on advertising, the business has grown as a result of a few key TV appearances and a chance encounter.

Teyssier was on vacation when she bumped into the stylist for Sarah Blakely, the founder of popular apparel brand Spanx. Teyssier told the stylist about Rainraps, and word of the startup made its way to Spanx.

An email from a Spanx representative eventually arrived, encouraging the Rainraps founders to apply for Blakely’s Leg Up, a program that promotes female entrepreneurs by featuring their products in Spanx’s catalogue. They did and were selected to appear in March 2013 catalogue.

“Sales jumped tremendously,” Struminger said. “It’s all been possible because of Spanx.”

They later met with Blakely, who advised Struminger and Teyssier to get their product on QVC, a home shopping network. They entered QVC Sprouts, an online entrepreneurial competition. In September the “Today Show” decided to feature the QVC Sprouts on its broadcast, giving Rainraps and five other vendors a chance to appear with Matt Lauer, Savannah Guthrie and Al Roker as they pitched their wares to a national audience.

“We lucked out, in a sense, to have that exposure,” Struminger said.

A second “Today Show” appearance came when Rainraps won the QVC competition with 38 percent of the vote. That led to a spot on QVC’s Prime Fashion Hour.

Rainraps are sold on the company’s website and in retail stores that order directly from the company. Their products can now be found in about 50 stores, including Saxon Shoes in Richmond, Andre’s Day Spa, May Fair House, She Chester and Belle Cottage. In November, Ashland-based Shipvine will begin handling Rainraps’ distribution.

“We’re trying to get as much publicity as we can. That’s how we’ve been surviving so far,” Struminger said. “We’re still trying to remain home for our kids. For now we just hope to continue to get the retailers the way we’ve gotten them so far, and we’ll be in good shape.”