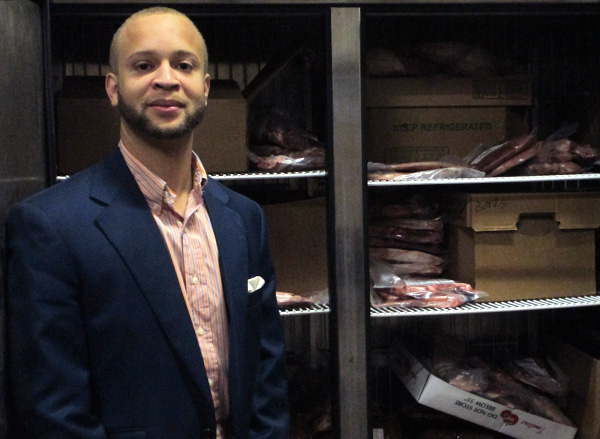 James Faison in a locker he rents at a Loving’s Produce warehouse. (Photos by Michael Thompson)

After leaving the world of corporate law to return to his family’s farms in southern Virginia, M. James Faison realized he didn’t exactly have a green thumb.

That’s when his entrepreneurial spirit kicked in.

The company focuses on shepherding hormone-, antibiotic- and steroid-free meat and works with about eight farmers providing pasture-raised beef and pork. Its first local clients are Ellwood Thompson’s, Saison in Jackson Ward and Kitchen on Cary in Shockoe Slip. Milton’s Local Harvest makes its cut off the mark-up between farm and table. 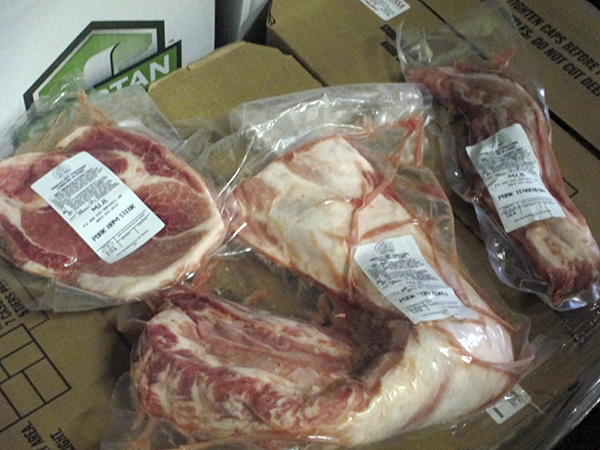 Born and raised in Emporia, the Harvard and University of Virginia Law graduate spent three years in Miami working in international corporate finance. In 2012, Faison and his siblings inherited 200 acres of farmland in Greensville and Southampton counties from their grandparents. When his grandfather died, Faison and his two siblings, all white-collar workers at the time, faced a question.

“We have these farms,” Faison said, “now what do we do with them?”

He moved back to Virginia that year to help run the farm along with his mother and siblings. Some introductory farming classes made Faison realize he’d be better suited to work behind the scenes than behind the plow.

“I can’t grow a blade of grass,” Faison said.

That’s when he began thinking about ways he could use his knowledge of business and law to contribute to his family farm as well as other area farmers.

Faison, 31, has spent about $30,000 to $40,000 of personal savings and investor money to get Milton’s Local Harvest up and running. The company is named after his grandfather.

Faison spent the past year meeting with farmers, distributors, butchers and restaurant owners, getting a bird’s eye view of the life of a steak. In the process, he proved to them that, although he has spent a lot of time in the boardroom, he is fully committed to the farmer’s life.

“It’s been a trust-building exercise,” Faison said. “We don’t charge the farmer anything. We buy the meat from the farmers and pay them more than what they would get on the commodity market.”

The company also works with two distributors and two processing plants. Faison’s chain of customers now spreads from Surrey to Lexington and Dinwiddie to Richmond.

He’s now looking to the Internet for the next phase of the business.

Faison hopes to leverage the supply chain he’s created to support an online market for wholesale byers. He sees his business as eventually functioning like a brokerage firm, connecting rural farmers to wholesale buyers looking to satisfy the urban demand for specifically-sourced meat.

Currently, Milton’s Local Harvest buys the meat from farmers and sells it to wholesale clients. By the second quarter of next year, Faison hopes to have the online market in full swing so he can focus on logistics and marketing of the cuts of meat. The business would then make its money off on transactional fees charged with each purchase.

Although Richmond and fundraising are his priorities, Faison has an eye on the markets farther north.

“We’re looking to get into D.C. and Baltimore,” Faison said. “We’re reclaiming traditional values that they had in previous generations before we started relying on mass farming and factory farms.” 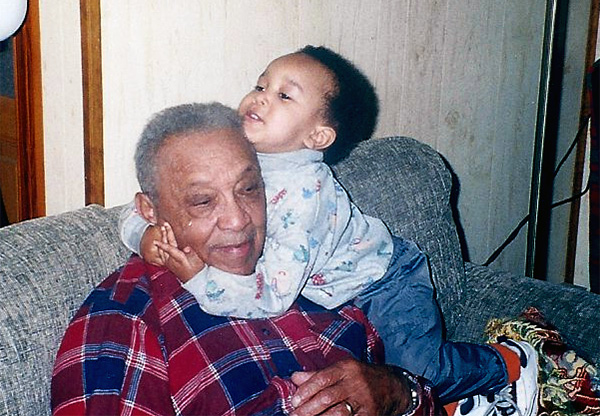 Congratulations, Mr. Faison. It is great to see an Emporia guy doing well. Good luck with the business, and I look forward to trying your products in Ellwood Thompson’s.

Hi James, Great Move..!!IHave family and received my master plumbing card in Emporia.We would like to invite you to the Friends of La plaza Latino Farmers Market retreat Dec. 14,2013 in Richmond from 9:00 AM to 12:00 PM…We have much to share!!

The grocery options in the southernmost counties of Virginia are pretty woebegone – Food Liar and Walmart dominate, but small farmer’s markets are starting to grow into viable competition for local consumers’ food dollars.

My college roommate and her husband (like me, d*mn yankees who have found a home in the Commonwealth) are farming in Brunswick County, growing some pretty epic “weird tomatoes” on their farm, Otis Acres- will tell them about Milton’s. You guys should talk!

Congratulations. Its great to see a Southampton County, VA person doing well from a Northampton County, NC friend with like last names and possibly family relatives and friends.