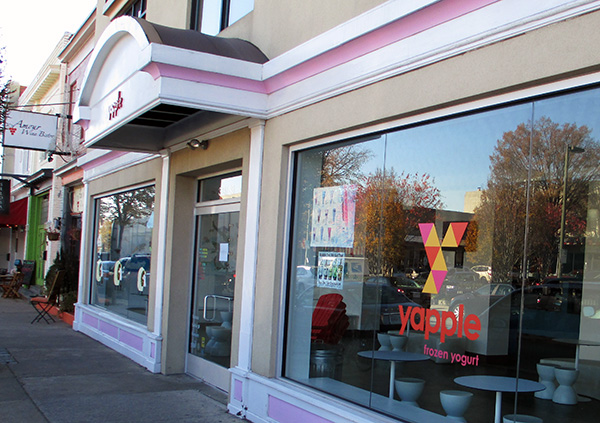 A Carytown frozen yogurt shop was locked out of its space Wednesday, but it might not be dark for long.

A sign posted on the door of the Yapple Yogurt at 3131-3 W. Cary St. said that the landlord had taken back possession of the property. The tenant, Yapple Yogurt of Carytown LLC, is in default of its lease, the sign said.

It directed further questions to local real estate firm Spotts & Carneal. Austin Joy of Spotts & Carneal would not comment on what he described as “a fluid situation” related to the Yapple space.

The Carytown location opened in summer 2012 directly next door to a Sweet Frog shop, prompting a frosty reception from its neighbor and competitor.

Yapple was founded in Pennsylvania by Andy Lin and also has locations in New Jersey and New York, according to its website. Lin could not be reached for comment.

The Carytown shop was the company’s first entry to the Richmond market. It opened a second location at 1601 Willow Lawn a few months later. The Willow Lawn location remains open for business, said Scott Yu, who runs both Richmond shops.

Yu said he is working with the landlord to remain in the Carytown space. He said he’s in the process of cutting ties with Yapple and creating a new frozen yogurt brand.

He said he’d look to eventually operate the Carytown and Willow Lawn shops under that new brand.

Its most unfortunate but the fact of the matter is that these frozen yogurt franchises were grossly oversold nationwide. The business model was simple and profitable for a short time but that time is well past. There is a small flood of yogurt related furnishing, fixtures and equipment on the market. I feel badly for the small business entrepreneurs who dumped hundreds of thousands of dollars to open these shops, personally signed three to five year leases only to find that the concept has peaked and is on a significant downswing.
Doug Sinclair, CAI, AARE

I’m shocked, shocked to find that another fro-yo is closing in Richmond….