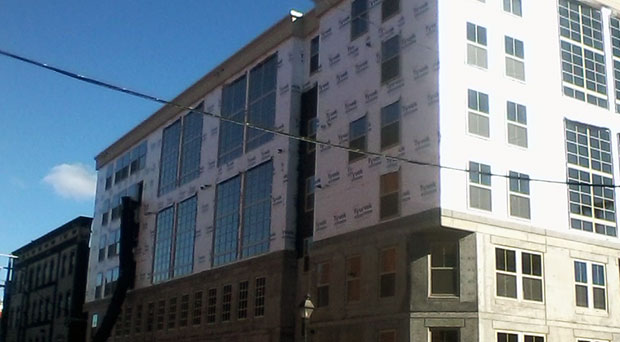 After a five-month review of Richmond’s tax abatement program, changes to the widely used real estate development incentive are being hammered out between the development community and city council.

The two sides met Friday at City Hall to review a draft ordinance presented by council members Parker Agelasto and Kathy Graziano. In the room were some of the power players of the local real estate development scene: Robin Miller of Miller & Associates, David White of SWA Construction, Tom Papa of Fountainhead Properties, Sam McDonald of Property Results and Walter Park of Walter Park Architects.

The proposed ordinance was written in an attempt to clarify a 30-year-old city code and to eliminate a loophole of sorts that allows developers to build an addition of any size onto an existing – even if crumbling – structure and still qualify for a break on future property taxes. 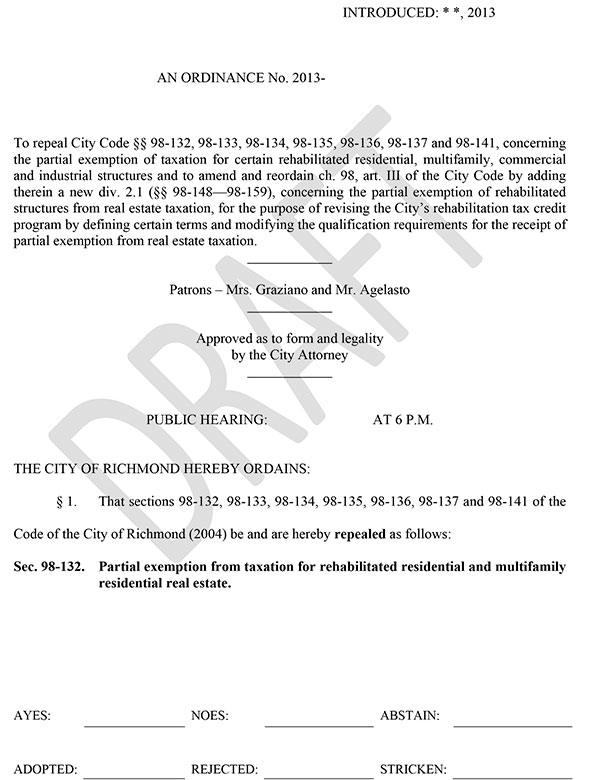 The current abatement code limits the size of a redevelopment if a building is demolished and replaced, but developers can knock over part of a structure to make way for new construction and still claim the project as a renovation or addition.

“It’s not a rehabilitation if you build off of one wall,” Agelasto said last week.

Graziano and Agelasto led a committee that reviewed the program over the past five months. The resulting new ordinance proposes to repeal the current tax abatement code and replace it with a completely new section.

Discussion of the issue has heated up since developer Louis Salomonsky moved a 220-square-foot pump house from an older property on Cary Street and built it into his new $24 million Shockoe Bottom apartment complex in a bid to have the project qualify for abatements.

The proposed changes sponsored by Agelasto and Graziano would disallow abatements on multifamily renovations or demolitions and replacements that increase the square footage of an existing building by more than 30 percent.

The draft also dictates that, in order to qualify for a tax abatement, a structure must been in place at its current location for at least 20 years with 80 percent of its original exterior walls intact.

Developers under current rules cannot demolish an entire building and build another building that is 30 percent larger in its place and qualify for an abatement. But the code does not impose the same limits to renovations of existing buildings.

The current abatement code also does not require a structure to sit at its previous location for any period of time.

Tax abatements encourage redevelopment by offering developers the opportunity to renovate or replace structures that are at least 20 years old without paying an increase in the property’s tax values for seven years on the resulting improvements.

The program has been crucial to downtown development, developers say. They argue that the tax abatements have been just as important as historic tax credits in spurring projects and that rolling back the program would slow the pace of redevelopment. 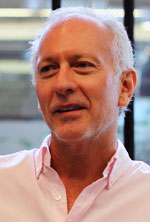 “This has been a very successful program,” Papa said. “But it feels like it keeps getting chipped away at.”

There is $1.8 billion worth of taxable assessed properties in the city that cannot be taxed next year because of they qualify for abatements. That accounts for about 9 percent of the city’s total real estate tax book. At the current property tax rate of $1.20 per $100 of assessed value, the abatement program will cost the city $21.6 million for 2014.

That figure will not take into account the end value of several multifamily renovations that are under construction.

An abatement holds the assessed value of a property for tax purposes at its pre-renovation level, which can save developers millions of dollars on larger projects over a decade.

After a renovation is completed, a property owner does not pay taxes on the increased property value for the next seven years. In the eighth year, the owner is on the hook for 25 percent of the difference between the current assessment and the pre-rehab assessment. That amount increases 25 percent in each successive year until the full improvement value becomes taxable beginning 11 years after the original redevelopment.

If, for example, a warehouse-turned-apartment project adds $10 million to a property’s assessed value, that property’s owner would save slightly more than $1 million on property taxes over a 10-year period.

Richmond has seen an increase in downtown redevelopment in recent years, as developers have targeted the city’s rundown buildings for new apartment complexes. Developers say these projects might not have been possible without the tax abatement program.

“The entire Plant Zero,” Papa said, referring to a Fountainhead apartment and art studio development in Manchester, “it just wouldn’t be there.”

Developers also maintain that the city recoups abatement money through other avenues, including restaurant and retail taxes supported by new apartment buildings and increases in non-abated, taxable surrounding real estate.

“The value of everything around us goes up,” architect and developer Walter Parks said. “The advantage to the city is huge. It is not a one-way gift.”

Several questions remained after Friday’s meeting, including whether interior build-out should count in determining square footage additions. Also up in the air is whether it makes sense to require 10 percent of the square footage in buildings 10 stories and taller to be commercial space in order to qualify as a mixed-use development. 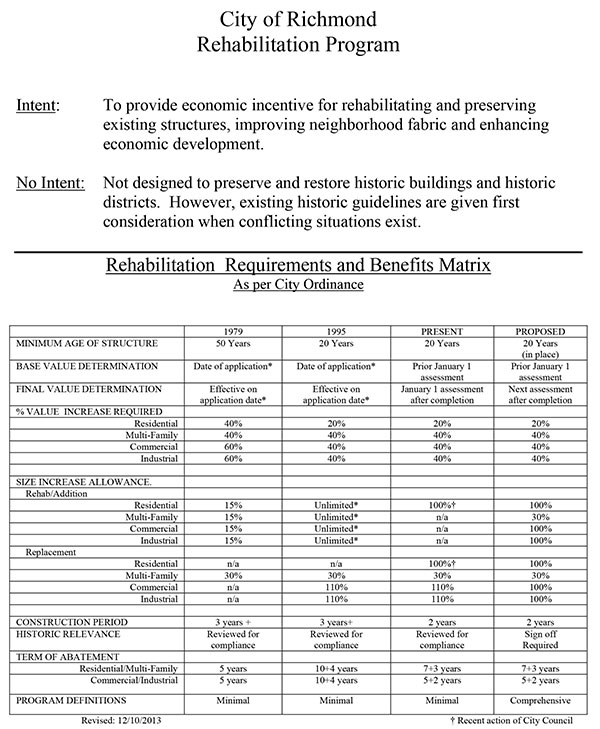 There is no timeline for introducing the new abatement ordinance to city council, and at least one more draft of the paper is likely forthcoming.

Both the council members and developers agree that a new ordinance will help clear up ambiguities within the tax abatement program code, which has been modified several times since its implementation in 1979.

“What we’re looking for is clarity and consistency,” Papa said. “Uncertainty is not a favorable environment to make a business decision.

Please stop attempting to frame this as some kind of handout. I believe your chart which attempts to illustrate the tax abatement is incorrect and misleading. The developer (or homeowner) gets a yearly credit for the difference between the pre-construction assessment and post-construction assessment. That “credit” is deducted from the assessed value of the property each year. So in your first example, the taxable value will NOT necessarily remain at $250k for the first 7 years. It will INCREASE as the assessment for the renovated property increases. When the new 2015 assessment goes to $5.5m, the taxable value of the… Read more »

“This has been a very successful program,” Papa said. “But it feels like it keeps getting chipped away at.” It’s not being chipped away; it’s being clarified. This is only happening because developers have chosen to act contrary to the spirit of the law. The Canal Lofts project just happens to be one of the more egregious attempts to circumvent the intentions of the tax abatement ordinances. For the most part, this program has been a resounding success (I’m not sure that this can be denied). Clarifying the laws will simply force developers to a) be more creative in their… Read more »

There is little doubt that the tax abatement program has been not merely instrumental but essential to the redevelopment of the City of Richmond. The builders of Richmond have come together under the umbrella of the Homebuilders Association of Richmond to work with the city officials to improve the program and other processes in the City. Together we’ll make Richmond a better place to live, work and play. Contact me at [email protected] if you’d like to join the effort.

What it will cost the city in loss of tax revenue for approving additions 100% the sq. footage of the existing buildings for many categories versus 30%? What are these new rules expected to cost the city over a decade in loss of tax revenue? Why isn’t there any wording to ensure that that the tax abatements are granted for rehabilitating properties in need of rehab rather than for additions to mansions and other buildings not needing rehabilitation? What do these regulations really mean if the existing regulations are not being enforced? Why is not the existing 30% limitation on… Read more »

Scott, I think you make several good points and there is a healthy discussion taking place regarding “structures” versus “buildings”. I must point out that the City’s audit shows that most of the building permits for this tax abatement program are for individual houses rather than new construction of apartments and its by a factor of about 50 to 1. However, there are an amazing number of vacant lots or lots occupied by buildings that are obsolete in Manchester and its hoped that the tax abatement program can be used to improve those conditions. Tax abatement, done correctly, is an… Read more »

The City should just link the program with the state and federal approvals. That way there wont be a conflict with proposed developments and the historic tax credit program. Under this ordinance there is potential for the City, state and federal to conflict with each other on what qualifies as historic renovation. I hope that in an effort to over regulate the program doesn’t loose the spirit of why the program was established in the first place..to help redevelop downtown Richmond. There is still a lot of work to do. Are we going to make the abatement so regulated as… Read more »

The tax abatement program has been a success. However, the spirit of the law has been terribly abused. Obviously, many of these developments would not be feasible without the abatement or tax subsidy. This is because of the high real estate tax the city has in relation to surrounding counties. How about this novel idea, scrap the tax abatement program, lower the real estate tax rate for everybody and make the projects economically feasible in their own right.The tax rate could be adjusted to equal what the program costs the city. By doing this, everybody benefits. The developers get to… Read more »

Tax abatements are a good tool to promote development.But like any rules that result in economic benefit, they are open to abuse. The folks that benefit economically will always be looking for a better advantage. It’s like water running downhill, always looking for the path of least resistance. Participants figure out how to game the system, so the rules have to be adjusted from time to time so the city gets the program result it wants. Such is life.

Quite a number of housing developers in this region believe that it is the solemn duty of local taxpayers to line the developers’ pockets.