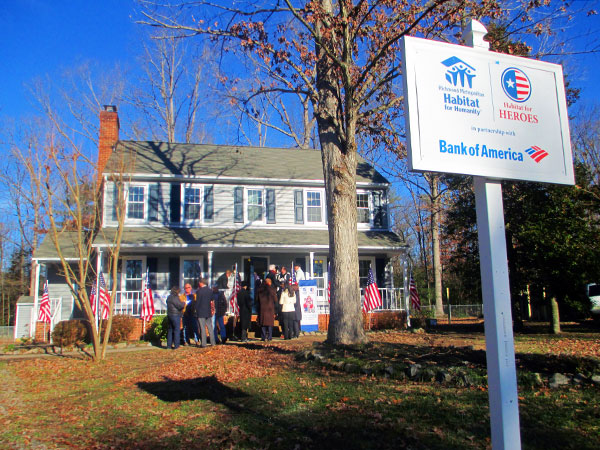 The house at 8800 Emory Oak Lane in Chesterfield. (Photos by Brandy Brubaker)

One of the nation’s biggest banks and a Richmond nonprofit have once again helped a local veteran find a new home.

Jamie Booker, a single mother of three who served in Iraq with the U.S. Army Reserves, got the keys Friday to a house at 8800 Emory Oak Lane in Chesterfield.

The move was part of the Habitat for Heroes program, an initiative by the Richmond Metropolitan Habitat for Humanity that kicked off last year with a donation of seven foreclosed homes from Bank of America. The houses are rehabbed and then used to help local veterans become homeowners. 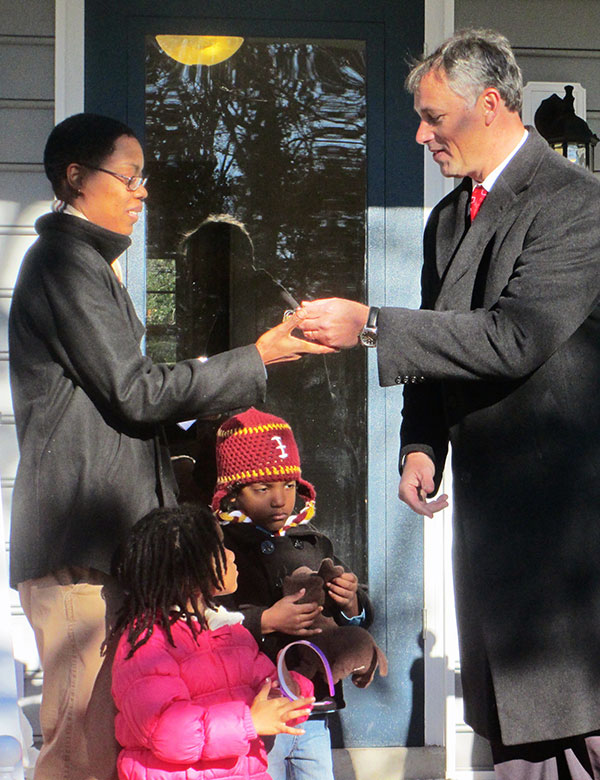 Jamie Booker gets the keys to her family’s new home from Gary Gore, Bank of America’s Virginia and Richmond market president.

Bank of America donated an additional house and a condo this year and gave the nonprofit the option to sell those homes on the open market to benefit the rehabilitation of the other houses, Richmond Habitat spokesperson Nancy Melton said.

The first seven houses have been given to or reserved for local families, most of which have a military connection, she said.

The condo at 5616 Crenshaw Road was sold, and the house at 3 AP Hill Ave. in Henrico is for sale, Melton said.

Bank of America chooses the properties from its portfolio, which includes vacant structures and undeveloped land, the bank said. Many of the properties, including the one Booker received, have been vacant or abandoned for an extended period of time.

The donations help the neighborhoods where the vacant or abandoned houses are located because Habitat fixes up the structures and brings in families to live in them, the bank said, which helps stabilize property values.

The houses come with an interest-free mortgage to be paid by the recipient but don’t require a down payment. Recipient must build “sweat equity” by doing 200 hours of volunteer time at their house or another Habitat house and must attend 10 financial and homeownership classes.

Booker is the second local veteran to receive a house from the Bank of America donation in the past two years.

“My family and I will be forever grateful,” Booker said.

Bank of America has pledged 2,000 vacant properties nationwide to Habitat for Humanity, the bank said. Another 1,000 properties are being donated to nonprofit groups that support veterans and first responders.