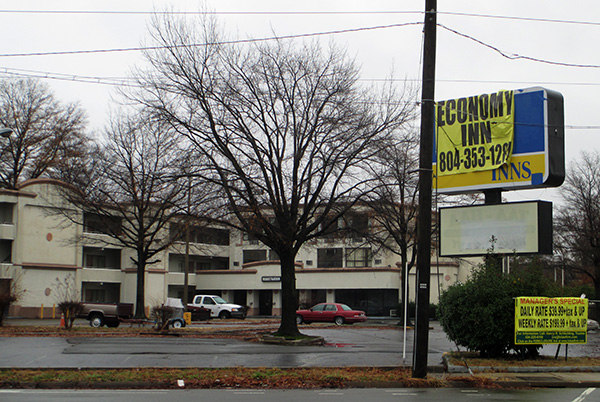 With a foreclosure on deck, the owners of a motel across from the Diamond have retreated into bankruptcy.

The former Bank of Richmond, now a division of Gateway Bank and Trust and part of Hampton Roads Bankshares, had been pushing to foreclose on two notes backed by the 45,862-square-foot, 1.6-acre property. 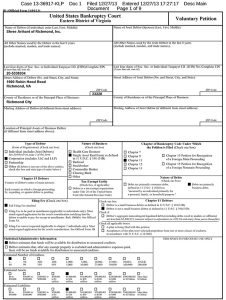 The firm also owes almost $578,000 in unsecured debts, according to its bankruptcy filing, although it is disputing about $288,000 in utility payments and real estate taxes owed to the City of Richmond.

Chapter 11 typically keeps creditors at bay until a borrower can work out a plan of reorganization.

Shree Arihant of Richmond’s assets are listed at between $1 million and $10 million, according to the filing. Powhatan County-based attorney Graham Jennings Jr. is representing Shree Arihant in the bankruptcy. Graham did not return several phone calls seeking comment.

In December, Shree Arihant of Richmond’s James Vora blamed a downturn in business at Economy Inn for the company’s default. He said the firm hoped to work out an agreement with its creditors and continue operating the motel.

The three-story motel was formerly known as the Scottish Inn, a franchise managed by Hospitality International Inc. That company also owns the Red Carpet Inn brand.

Vohra lost the rights to use the Red Carpet and Scottish Inns names in 2012, according to a 2013 lawsuit filed by the owners of both brands.

In that case, Hospitality International and Southern Scottish Inns Inc. alleged that Vohra continued to use the two hotel brands after the franchise agreement was terminated. The lawsuit was dismissed in October 2013.

Real estate near the Diamond has been a hot topic since Richmond Mayor Dwight Jones unveiled a plan to demolish the baseball stadium to open the 60 acres across from the Economy Inn for a massive mixed-use redevelopment. That plan is contingent on construction of a new baseball stadium in Shockoe Bottom to replace the Diamond.

OK, I’ll say it – why the heck can’t a new multi-use development on the Boulevard include a stadium? The motel that’s the subject of the story always looked like a great place to either hide, or become, a dead body. Seems to me that the city is keeping the area north of the railroad tracks an abysmal eyesore in order to support their theory that a stadium should be built in the Bottom. I don’t really have a dog in that fight – although I can’t say I’m excited about the Shockoe stadium plan – but why can’t the… Read more »