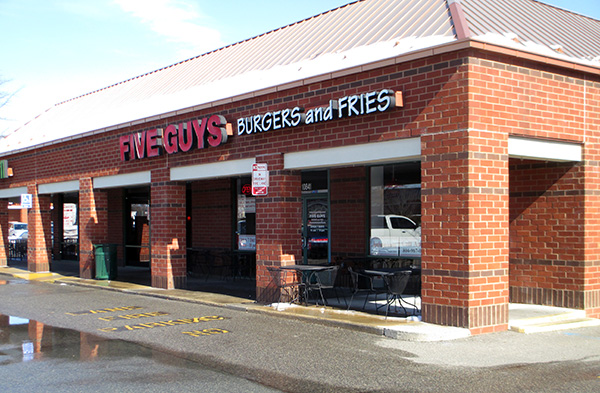 Two Richmond locations of a popular burger chain have new owners who are hungry for expansion.

Buckeye Burgers bought the Five Guys Burger and Fries franchises at 10841 W. Broad St. in Innsbrook and at 1601 Willow Lawn Dr. at the Shops at Willow Lawn.

The company paid $2.1 million to take over the two locations. The deal included territory for future franchises in the Richmond area. Buckeye Burgers is owned by Ohio residents Bob Bowers and his wife Amira Bowers. Bob Bowers’ parents, Larry and Harriet Bowers, are also owners.

Bob Bowers said the company plans to renovate the locations to make them look more contemporary.

The Bowers clan has three decades of burger experience.

Larry Bowers bought his first franchise, a Wendy’s in Columbus, Ohio, more than 30 years ago. Bob Bowers eventually joined his father’s operation, and they added a second Wendy’s. They eventually sold their Wendy’s businesses in search of a different franchise model.

“We decided to get out of Wendy’s and get in a concept that we really liked and could expand,” Bob Bowers said. “We wanted the concept to be all about the food and not commercials.”

Bob and Amira Bowers are moving to Richmond to oversee their new franchises. Bob Bowers said they decided go with the market after considering Five Guys franchises in Florida and Nevada.

“The whole country is sold out,” Bob Bowers said of the Five Guys franchise market. Five Guys says on its website that it is indeed sold out of territories in the U.S. and Canada.

Bowers said they would eventually look to open three more Richmond area Five Guys locations. There are 10 in the region.

The Lorton, Va.-based brand has opened more than 1,000 restaurants in less than five years.