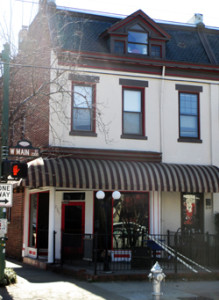 Another member of a Richmond restaurant family strikes out on his own.

Sonny Kiatsuranon and his wife Vow next month will open Fan Noodle Bar at 2301 W. Main St. The space had previously been home to Mediterranean Bistro, which later re-branded as Luckie’s Bar & Grill.

Kiatsuranon said he is spending about $30,000 to renovate the 1,500-square-foot space and is financing his efforts with savings and family help.

And he has the right family for the job.

Kiatsuranon, 33, is the son of Sukanya Pala-art, owner of Thai restaurant Mom’s Siam in Carytown and Shockoe Slip. His younger brother, Joe Kiatsuranon last year opened My Noodle and Bar on Monument Avenue.

Kiatsuranon said he plans to serve Asian “hangover food” that will include a mix of Chinese, Japanese and Thai cuisine. If he can secure the proper permitting, he hopes to stay open until 3 or 4 a.m. to give residents and bar hoppers a late-night dining option.

“If they’re tipsy, they can eat a little bit to cure their hangover or to get over being drunk,” Kiatsuranon said. “It’s up to the Fan [District] Association and the city if they want me to do this.”

Kiatsuranon said he’s inspired to focus on late-night dining in part because of a friend who died in 2013 after he was hit by a car while walking to the Denny’s on West Broad Street in search of some late-night fare.

As for setting prices for his target crowd, entrees at Fan Noodle bar won’t be more than $8, Kiatsuranon said.

“I don’t want anything expensive,” he said. “I want to make it hipster-friendly.”