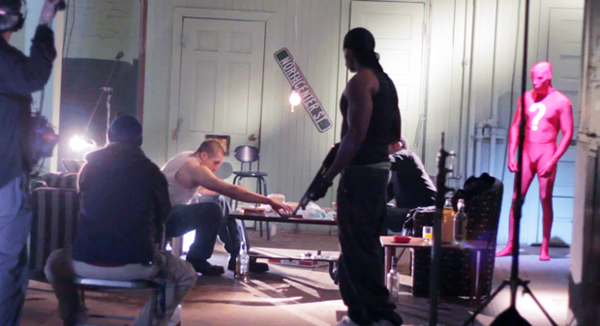 Move over, McGruff. There’s a new crime stopper in town.

Metro Richmond Crime Stoppers is introducing Question Mark Man — or Q-man for short – as its new mascot. He’s a faceless figure who drops a dime on crime – without anyone ever knowing his true identity.

It’s part of a new ad campaign from the local nonprofit to encourage citizens to contact the organization when they witness a crime.

“It’s about being faceless,” said Tim Holt, The King Agency’s senior art director. “Anonymity is really what we’re after. That led me to Q-man.”

Director Sunny Zhao goes over the plan for the shoot.

Q-man – an actor in a red body suit with a white question mark on his chest – is a witness to crime. He watches from the shadows and no one knows who he is.

The campaign is set to launch in April and will include TV commercials, print advertisements and billboards, The King Agency said.

Metro Richmond Crime Stoppers offers a cash reward of up to $1,000 for anonymous tips that lead to arrests in felony cases.

“We just want to reinforce the fact; If you see something, there’s money in it for you and you remain out of the picture,” said Michael Sanfilippo, a member of Crime Stoppers’ board of director and chairman of its marketing committee.

Sanfilippo said he can’t remember when the group last advertised, so they thought it was a good time to get the word out.

“You never want to take for granted that everybody knows who you are and what you do,” he said.

Metro Richmond Crime Stoppers is funded by donations and receives no tax dollars. The King Agency donated its services and others agreed to work for free or for a heavily reduced rate, Sanfilippo said.

The commercial will cost $10,000 to produce and will air for free on local television stations. Sanfilippo said they haven’t yet figured out budgets for the rest of the campaign’s components.

Since its inception in 1984, Metro Richmond Crime Stoppers’ tips have led to 5,109 arrests and a total payout of $350,103 to tipsters, according to its website. A little more than $2 million in stolen property has been recovered and nearly $2 million in narcotics has been seized as a result of tips.

Brilliant idea! It will appeal especially to the generation who love computer game characters because it gives their imaginations an opportunity to fight crime.