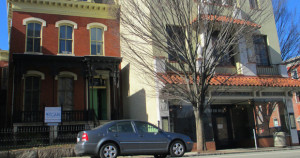 The Child Advocacy Center is moving next door to SCAN.

An arm of a local nonprofit is getting a new home.

Richmond’s Child Advocacy Center, which helps abused children, is moving to 101 E. Grace St. It will be next door to Greater Richmond SCAN (Stop Child Abuse Now) which runs the CAC.

CAC Coordinator Ian Danielsen said the organization has outgrown its current space in the old city hall on East Broad Street. When part of the building next door to SCAN became available for rent, they jumped at the chance.

“More and more jurisdictions are using us to coordinate their child-abuse investigations,” Danielsen said.

Although he didn’t know the exact square footage, Danielsen said the new location – most recently an architectural firm – is larger than the approximately 2,000-square-foot suite they have now. It will open April 1.

A child advocacy center offers a safe, kid-friendly environment for children to talk about abuse with a trained forensic interviewer who can gather information for possible prosecution against suspected offenders.

Meanwhile, in another room, police and prosecutors can watch the interview on a live video feed, preventing the child from having to tell the story over and over to various authorities. CAC also offers counseling and other services.

“We ensure the system doesn’t re-traumatize the child,” Danielsen said. “It’s our job to hang in there with the family.” A majority of the children they serve make allegations of sexual abuse.

SCAN’s child advocacy center works with teams of law-enforcement professionals from Richmond and the counties of Henrico, Chesterfield, Prince George and Louisa. It also accepts cases from other nearby counties as a courtesy.

SCAN started the CAC in 2004. That year, the center served 61 children, the group said. More and more agencies began to bring them cases and during the 2012-13 fiscal year, CAC served 535 children. The center did 375 forensic interviews in 2013, Danielsen said.

The CAC is raising $45,000 to cover the cost of the move and renovations necessary for the new center, Danielsen said. Capital Construction Group is general contractor and Baskervill will be the architect.

The new space will have more therapy rooms, a larger forensic interview room, a larger observation room, more play areas, more room for file storage and expanded meeting space, the group said. The center will have kid-sized furniture, a gaming station and toys, and will be decorated with children’s artwork.

The CAC is just one arm of SCAN. CAC’s approximately $350,000 annual budget is funded by grants, donations and insurance payments for mental health services rendered, Danielsen said. Since 2005, the center has received a state grant of $60,000-$80,000 a year. Danielsen said no one is turned away because they don’t have insurance.

The CAC has three full-time employees and several part-time mental health professionals, and leans on student interns and volunteers.

There are as many as 800 child advocacy centers nationally and 16 in Virginia, the group said.

According to Guidestar, SCAN, as a whole, reported revenue of $1.21 million, expenses of $1.24 million in 2012, the most recent data available.

Founded in 1991, SCAN’s mission is to prevent and treat child abuse and neglect in the Greater Richmond area, according to its website.