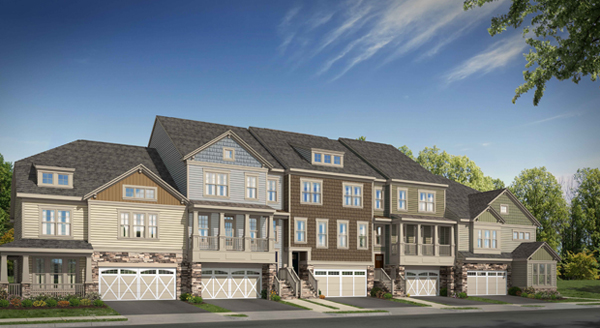 Two of the area’s busiest builders and developers have more than 100 new townhouses and a commercial development in the works near Short Pump.

The site is near Twin Hickory’s intersection with Nuckols Road and is across the street from Preston Square, another townhouse development.

The Hickory Place homes have at least 2,600 square feet, Fleck said. They’ll be priced in the $400,000s starting out. The townhouses will be three stories tall and will offer rooftop terraces and driveways.

Fleck anticipates that sales will begin in November, after a model home is completed. 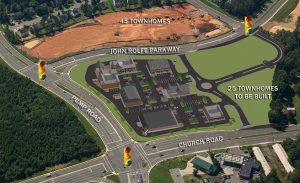 A site plan for the Shire. Rebkee’s planned commercial section sits just below the land Eagle cleared for its townhouses.

A few miles away, Eagle is already building 45 townhomes at Shire Place. That project is off John Rolfe Parkway where it hits Pump Road close to Short Pump.

The townhouses start at 2,100 square feet and a price of about $329,900. Fleck said they’ll start selling in June, after the model is completed.

Markel | Eagle Partners, another part of the Eagle Companies, acquired the 10.6-acre parcel for Shire Place in November through an LLC for $2.3 million, according to Henrico County records.

Eagle decided townhouses were a good fit for the Short Pump area because of the success of West Broad Village, Vice President and Chief Operating Officer Jeff Kornblau said in an email. West Broad Village, where Eagle is one of two builders along with Ryan Homes, has only a few more townhouses available for purchase.

Kevin McFadden, a partner at Midlothian-based Rebkee, said the firm is in talks with retailers for a 70,000-square-foot commercial development. He anticipates the project will cost close to $10 million to build. It would be located on eight acres along Pump Road between John Rolfe Parkway and Church Road.

The property is already zoned for commercial development so construction can start as soon as Rebkee signs on some tenants. McFadden said the property could be used for a bank branch, a free-standing pharmacy and some other shops – businesses that would offer convenience to the people living in the townhouses.

McFadden said Rebkee is close to signing a deal with another homebuilder for the remaining three or four acres that are zoned for 25 townhouses. Rebkee acquired the full 12-acre property for $4.5 million in 2006, according to county records.

Both Eagle and Rebkee have been busy in recent months.

In November, Rebkee acquired a piece of property along the 17th Street Farmers Market and very near the site of the proposed $200 million Shockoe Bottom ballpark village development. It is also in the midst of a $23-million apartment conversion at the former Interbake Cookie factory.

Eagle Construction built 303 homes last year, up from 193 in 2012, according to a recent ranking of Richmond homebuilders.

Below is a map for the site of Hickory Place: