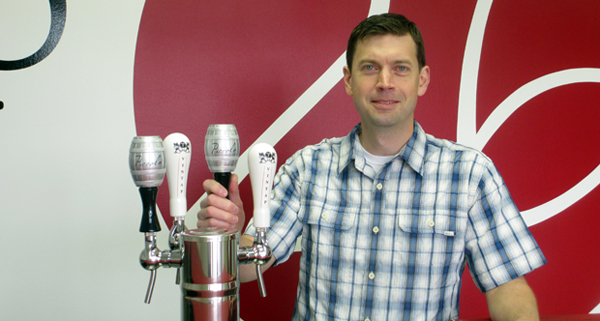 As the ever-growing list of craft breweries fight for tap space at bars, an Ashland startup is trying to muscle a different libation onto draft lists.

Tap26, a six-month-old wine distributor headquartered on Airpark Road in Hanover County, is working to convince wineries, restaurants and imbibers that wine on tap is the way of the future.

“We’re not trying to get people to dump bottles, but we want them to get the stuff that they are pouring more often into kegs,” said Jon Lintvet, Tap26’s founder. “If they do enough volume, this is a good way to go.”

Tap26 works in much the same way as any other alcoholic beverage distributor. It buys wine from winemakers and sells it to restaurants and bars. The company differs from its wine-distributing counterparts, Lintvet said, because it deals only in kegs. One keg holds 26 bottles of wine — hence the Tap26 name. 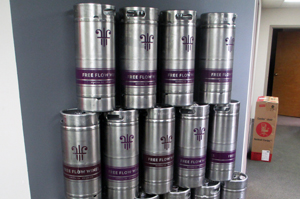 While diners may be as used to tableside wine pours as beer flows from the taps, Lintvet said kegging could bump restaurateur wine margins up by 20 to 30 percent.

That’s because much of the wine left in the bottle will go bad in an open container. Wine, like other beverages, stays fresh longer in kegs.

“Forget the cost because they know their cost per ounce. But what is that in lost revenue?” Lintvet said.

The idea hasn’t caught on completely, but it’s gaining traction. Tap26 wines will be flowing from about 60 taps in Richmond by the end of the month. That’s major progress, Lintvet said. About 85 percent of the wine taps in town today didn’t exist two months.

Some restaurateurs have bought into wines on draft after hearing a single Tap26 pitch, he said. It’s been a tougher sell to others given the costs associated with setting up wine taps and the idea that customers will prefer wine out of a bottle.

But the craft beer surge has helped Lintvet clear the second hurdle by making the idea of any product on draft appealing to customers.

“People just assume that whatever comes out of a tap is going to be yummy,” he said.

The company is also launching its Virginia on Draft Barrel Program, aimed at reaching small Virginia wineries that lack their own kegging system.

For its Draft Barrel Program, Tap26 rents pressurized, ready-to-fill kegs from California-based packing company Free Flow Wines and sends them to a winery or cidery. The vintners fill them with their product and sell it back to Tap26. Lintvet’s company then resells the kegs to a restaurant and delivers the product. Once the keg is kicked, Tap26 picks it up and sends it back to Free Flow, where it is cleaned and sent out again.

Lintvet said his new Virginia on Draft Barrel Program will help knock down barriers to the draft market for Virginia wineries. The program’s kegs, which hold 5.17 gallons, cost about $100 each. Many local wineries don’t produce enough product to justify investing in a kegging system, Lintvet said.

“Taking two cases of wine out of their production and putting them into a keg is a big decision,” he said. 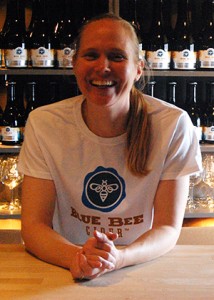 Tap26 has struck a deal to put Manchester-based Blue Bee Cider in kegs and on tap at local bars and restaurants. Blue Bee will roll out four of its ciders in kegs between May and September.

It will be the first time Blue Bee’s ciders will be available on draft aside from a “brief experiment” founder Courtney Mailey conducted last year. She bought her own kegs, filled and sent a pair of them to Mekong on W. Broad Street before deciding instead to distribute only in bottles.

“Through that test, we learned a few things about what it would take to do kegs,” she said. “Tap26 is definitely a better option for us in terms of capital and connecting us with resources to make kegging feasible for a small distributor like us.”

For starters, Tap26 is pushing bars and restaurants to save a single tap line for the Virginia Draft Barrel Program. Blue Bee will start filling those spaces in May with its Charred Ordinary cider. The cidery will release its Hopsap Shandy on draft in June, a cider name Fanfare in July and the Mill Race Bramble in September.

Lintvet, previously a chief marketing officer for a Wisconsin-based software company, self-financed the first few months of his business before bringing on investors in December. He’s since expanded into Washington, D.C. and added a second warehouse to service that market.

Lintvet is also looking at growing his business into Maryland and said North Carolina is “within striking distance.” The company would like to grow both organically and through acquisition.

But first, Tap26 may need to expand closer to home. Specifically, Lintvet has his eye on the office next door.

“We will outgrow this space in a couple of months,” Lintvet said of his Hanover headquarters 11159 Airpark Road. “There’s no place to put the stuff and we can’t burn through it fast enough.”