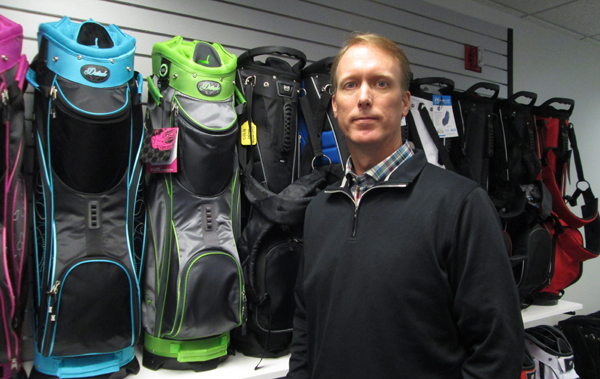 A Richmond-based golf gear maker has scored a deal north of the border.

Financial specifics of the acquisition were not disclosed. The deal closed the first week of April.

Dynamic Brands targeted Riksha’s main product – a big-wheel push cart that golfers use to lug around their clubs. Leighton 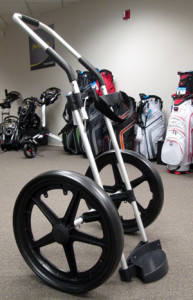 The Riksha Golf carts, the main product of the company Dynamic acquired earlier this month. (Photo by Michael Schwartz.)

Klevana, Dynamic Brands CEO, said it will look to take advantage of its widespread distribution system to tap into new markets for the carts.

“(Riksha) has really focused on the Canadian market but hasn’t had the resources to explore the U.S. or Europe and Asia,” said Klevana. “That’s where we see a lot of the growth potential.”

Klevana said the transaction came together when he approached the owner of Riksha Golf at a trade show in January. The owner, 86, had been thinking about retiring and was motivated to do a deal, Klevana said.

Riksha has built its model around selling its carts as rentals to golf courses, rather than in retail stores. Dynamic Brands will continue with that niche, as the company also has its own brand of push and pull club carts under the well-known Bag Boy name.

The deal marks a slight shift for Dynamic Brands. Klevana said it will soon begin to manufacture the Riksha carts domestically. That’s a departure from its practice of importing most of its goods from Asia or South America.

“It’s a little bit different business than what we currently do,” Klevana said.

Its golf towels, for example, are made in Brazil and Asia and shipped to the Dynamic Brands facility in Monroe, N.C., near Charlotte, where they are customized for its customers, including the U.S. Open, the PGA Championship, the Ryder Cup and Country Club of Virginia.

Riksha currently makes its carts at a facility in Calgary. Klevana said it will move production to North Carolina later this year.

Founded in 2004, Dynamic Brands keeps a low profile from its office at 2701 Emerywood Parkway near West Broad Street and Glenside Drive.

It has grown through several acquisitions over the years.

Its most recognizable brand, Klevana said, is Bag Boy. Its other products are sold under the Burton, Datrek, Devant and Sir Christopher Hatton brands. The products are sold in Dick’s Sporting Goods, Sports Authority and specialty retailers and at country clubs and golf courses.

Bag Boy was originally part of the Ben Hogan Co., a former Richmond-based firm, until it was sold to Spalding in 1997. Klevana and his crew eventually bought the Bag Boy brand and split it off.

In one of its few diversions from golf products, Dynamic Brands previously owned Baby Jogger, a brand of strollers. It sold that line in 2012 to focus more on golf.

Congrats Leighton and the entire Dynamic team! Wishing you continued success during your growth!