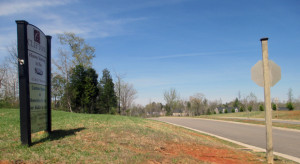 The remaining vacant lots in the Clifton subdivision soon will have a new owner. (Photo by Brandy Brubaker)

A new owner is looking to get a piece of a Goochland subdivision back on task.

Locally based Emerald Homes has agreed to purchase the remaining 17 lots in Clifton, a partially completed housing development off Maidens Road in Maidens, not far from Fairground Road and Oilville.

Essex Bank took the lots back  before their previous owner completed the infrastructure to make the remaining lots ready for sale and construction. The lots were transferred to the bank through a deed in lieu of foreclosure.

R.T. Avery, president of Emerald Homes, said his company heard about the approached the bank to buy 16 lots. Emerald is picking up the 17th lot from a different owner.

The property is near The Village at Courthouse Commons, another Emerald Homes subdivision off Route 522 not far from J. Sargeant Reynolds Community College.

“We’ve had some fairly significant success in the last six to nine months,” Avery said. “We’re down to our last lot in Courthouse Commons, and we’re trying to keep our momentum going in that market.”

The bank hired Stanley Construction of Ashland to complete the infrastructure on some of the empty Clifton lots. Avery said his company hopes to start building houses on the already developed lots within the next 60 days.

Avery said the property Emerald acquired is at least 50 acres. Although the lots will vary in size, he estimated that they’ll be at least two acres each to accommodate wells and septic systems. He declined to discuss the company’s total investment for the subdivision.

The houses will be similar to what Emerald has built at Courthouse Commons. They’ll start out at about $240,000 and will be at least 1,700 square feet. The houses will have brick stoops or porches on the front and decks on the back.

“There’s not as many desirable locations available for moderately priced, affordable homes in our area,” he said.

Clifton was originally developed by DES LLC and Earl Thompson.

It is the latest unfinished neighborhood to get a jump start this year.

Work is beginning after a two-year delay at Wellspring Village, a 161-lot development off Harrowgate Road in Chester.

Several other subdivisions in the region have new phases of development in the works, including Cedar Grove in northern Henrico County and Stable Hill in Glen Allen. Magnolia Lakes has a new owner with construction financing lined up.

Correction/Clarification:  A previous version of this story incorrectly characterized that Clifton as whole, including the 16 lots referenced in the article, had been in foreclosure. The 16 lots in fact went back to Essex Bank through a deed in lieu of foreclosure. That process allows a borrower to turn over the collateral on a loan to avoid foreclosure proceedings. Emerald Homes then purchased the 16 lots from Essex Bank.