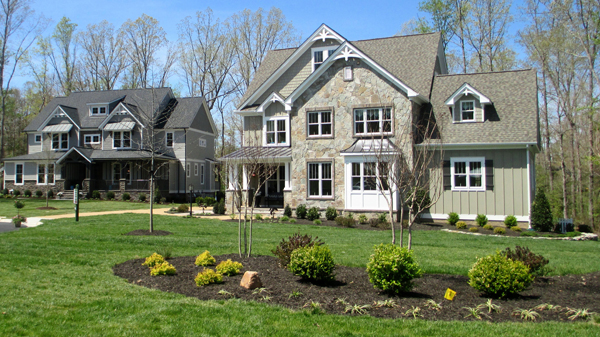 Houses by Ray A. Williams Custom Homes (left) and Southern Traditions neighbor each other in the Homearama neighborhood (Photo by Brandy Brubaker)

The houses have been built and decorated to the hilt. Now it’s time to show them off.

Homearama begins today and is being held this year at Magnolia Green’s Veranda Oaks neighborhood in Chesterfield County. The event runs through May 18.

“Each builder is given a designer,” said Justin Calliott of Becker & Calliott Marketing, which is in charge of promoting the event. “The designer and the builder work together. They pick the plan. They pick the cool features. And then they decorate the whole home.”

This year’s design highlights include a secret garden off a master bedroom, a large custom-made wine cellar, a 600-square-foot bathroom, an English pub-styled den and a waterfall built into the wall.

One home, “The Clover” built by Biringer Homes, was designed along with Young House Love, a Richmond husband-and-wife team that runs a popular blog on do-it-yourself house projects and has a line of home goods in Target. 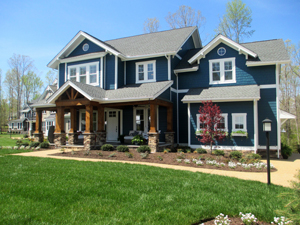 A house built by Biringer Builders (Photo by Brandy Brubaker).

The houses featured at Homearama are all for sale. A lot of the furnishings are too.

Veranda Oaks, a custom-build section in Magnolia Green, has 37 lots including the seven being used for Homearama houses. Twenty-three of the lots are still available for purchase, said Teri Smith, spokesperson for Magnolia Green. Several more homes are under construction there.

In addition to Biringer, other builders who took on a house for Homearama include LeGault Homes, Falcone Custom Homes, Harring Construction Co., LifeStyle Builders and Developers, Ray A. Williams Construction Co. and Southern Traditions.

Homearama started in Richmond in the 1980s, but the show was discontinued in the mid-1990s, Calliott said. It was brought back to life in 2010 at Patriots Landing in New Kent County and was held again in 2012 at Summer Lake in Chesterfield County.

This year’s event is presented by the Home Building Association of Richmond and is open from 11 a.m. to 6 p.m. each Thursday through Sunday. Admittance is granted until 4 p.m. Tickets are $8 online or $10 at the gate. Visitors 18 and under are free.

The Home Building Association wants to return the show to an annual schedule and has secured a spot at the Collington subdivision in Chesterfield County for Homearama 2015, Calliott said.

I think Bob Himmel with Himmel Hume Architects came up with the waterfall and secret garden. Fantastic, creative and impressive.

Brilliant work by Bob Himmel with Himmel Hume Architects. He (they) really knows his stuff. Truly beautiful and creative work. It’s an honor to have such talent in #RVA.

These homes are fabulous. The show takes new homes to a new level in the greater Richmond area. Very exciting to see the return of a robust market.