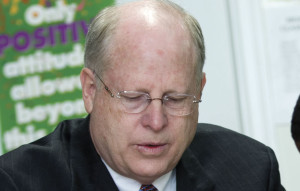 It’s hard to drive around Richmond — particularly in Henrico County — without passing near something Bob Atack had a hand in.

The longtime local real estate developer, who died Wednesday after an illness at age 66, was the mastermind behind thousands of home sites at dozens of subdivisions across the region.

All told Atack and his firm, Atack Properties, developed about 5,000 lots in Henrico County, 1,000 in Hanover County, hundreds in Chesterfield County and dozens in the city of Richmond, said Jim Theobald, the Hirschler Fleischer attorney who represented Atack for decades on his projects.

That’s not to mention the apartment properties, office buildings in Innsbrook and other commercial projects he worked on even up until his illness took him out of the day-to-day.

Atack made his mark in Henrico County with projects such as CrossRidge, Church Run, Hunton Estates, Henley and Magnolia Ridge. In Hanover County there’s AshCreek, Fox Head, Bethany Estates and Red Hill, to name a few. There’s Winterfield Station in Chesterfield among others.

All that development meant a lot of time negotiating with landowners, local officials and the like.

Virgil Hazelett, the former longtime county manager of Henrico County, had many an interaction with Atack as he developed his way across the county.

“He was always a player that knew what he wanted to do, yet he was always willing to negotiate,” Hazelett said of Atack. “He was a tough negotiator. He would stay on point. He wouldn’t give until he realized it wasn’t going to go completely his way.

“We didn’t always agree, but that never bothered Bob.”

He fought for his projects and hit some obstacles along the way. He fought and was cleared on felony charges related to alleged banking law violations in 2008. Then came the recession which touched all developers.

He also fought quietly for good causes. His philanthropic side was one that he didn’t like to advertise.

“He put a lot of money into things,” Hazelett said. “He didn’t want to beat his chest about that.”

Two organizations he was particularly close to were Good Samaritan Ministries and Mount Vernon Baptist Church. His charitable works led to his receiving the Hearthstone Builder Humanitarian Award from the National Association of Home Builders in 2007.

A native of Cleveland, Atack grew up in Lakeside and attended Virginia Commonwealth University. He got his start in real estate in 1971 as a broker with a predecessor to what is now Long & Foster. He started Atack Properties in 1985.

Bud Ohly, who runs local homebuilder Eagle Construction, met Atack when Eagle was starting out. Atack became an owner of Eagle for a time.

“He was a big-time guy when we were little guys,” Ohly said. “I was very intimidated by Bob. I was nervous every time I talked to him.”

“You got the full spectrum with Bob Atack. Bob was kind and compassionate. And he was also tough at times. He described himself as volatile.”

Atack’s passing does not mean the end of Atack Properties, and proof of his appetite for development is seen in the many projects the company has in the works.

The Ridings, a massive development in Varina is still in its early stages. A 70-acre medical office park and mixed-use project will come up west of Short Pump.

Swanson Ridge, a new Goochland subdivision will take shape in the fall.

“We would discuss those daily until really just a few days ago,” Theobald said.

The staff of Atack Properties will continue on, including Atack’s son, Cory.

“We’ve had a number of months to sort of prepare for this day,” Theobald said of Atack’s passing. “They are all feeling very strong and optimistic about the future of Atack Properties.”

A service for Atack will be held Monday at 11 a.m. at Mount Vernon Baptist Church. Bliley’s Funeral Home is handling the arrangements.

Bob was a great business man and a giving soul. I am glad that I was able to work for him. He was a great man to know and helped me greatly. Thanks Bob

I can’t say it any better about Mr. Atack: Richmond Builder & Developer nationally recognized for Lifetime of Philanthropy: Robert Atack Receives 2007 Hearthstone Builder Humanitarian Award October 27th, 2011 Robert Atack, President of Atack Properties , was presented to the prestigious Hearthstone Builder Humanitarian Award for his philanthropy and his lifelong commitment to helping others. The award, which includes a donation of $150 000 to charities of choice Atack, was presented at a gala held during the Annual Conference Home Builders National Association in Orlando, Florida. Charitable donations Atack focused on his hometown of Richmond, Virginia, where he has… Read more »

Bob was a true gentleman. I’ll never forget his self-deprecating humor or the way he made you feel you were the most important person in the room with him. He will be missed.

More than 20 years ago, I was in the Richmond area looking for property to buy when my Ford truck got stuck in some deep mud. I noticed a sign that said that the property was owned by Atack Properties and I called the number on it. Bob sent his son Corey over with a truck and a chain and Corey pulled me out of the mudhole. (Corey told me to buy GM next time.) That’s my story on meeting Bob Atack. Bob and I’ve worked on real estate deals for the last 20 years, and I’ve never met a… Read more »

I had the privilege of working for Bob at Bowers, Nelms and Fonville and at he took me with him when he started Atack Properties. Bob will always remain my favorite boss. Thanks for the fantastic work trips!