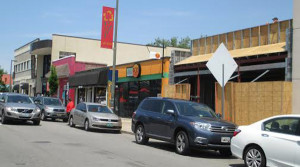 Jimmy John’s will open in Carytown later this month. (Photo by Michael Thompson.)

For his fourth sandwich shop franchise, a Richmond criminal defense lawyer is taking on one of the area’s most popular shopping districts.

Broughton, a partner at Richmond-based law firm Williams Mullen, signed a five-year lease in December for the 2,280-square-foot space, formerly home to an H&R Block.

“Carytown is a Richmond landmark,” Broughton said. “The space we’re taking over has been a bit of an eyesore for the last several years.”

Planned renovations include outdoor seating and a new façade, Broughton said. The initial cost to open a Jimmy John’s franchise runs from $305,500 to $487,500, according to the company’s website. Broughton wouldn’t say how much he’s paying to open what will be his fourth location but did say he is financing it with the help of family and friends. Griffin Real Estate LLC owns the property.

Broughton opened his first Jimmy John’s in 2009 at 11500 Midlothian Turnpike in Chesterfield Towne Center. He added a spot in 2011 North Belvidere and West Franklin streets and in 2013 opened in Shockoe Slip.

With so many restaurants lining Carytown, Broughton said he’ll take aim at shoppers looking for a quick bite either on-site or delivered by bicycle. 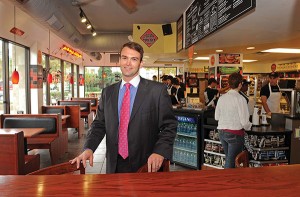 “We’re not trying to change Carytown,” Broughton said. “We’re trying to be consistent with Carytown and even enhance it with this particular store.”

Jimmy John’s launched in 1983 and is headquartered in Illinois. The Carytown spot will be the area’s eighth, joining more than 1,900 locations nationwide.

All those locations aside, Broughton sees his venture on a more local scale.

“I was born and raised in Richmond,” Broughton, a Collegiate School graduate, said. “I’m about as local as you can get.”

He’s exactly right that that building has been one of the less attractive properties over the recent years. I’m glad to see it getting a new life.

I’d prefer to see more locally based, idependent businesses opening in Carytown. We already have more than enough open-air strip malls and chain retailers in the city. Why not preserve a unique shopping/restaurant district from becoming yet another faceless corporate preserve?

I agree — my earlier comment was meant to be sarcastic. Bringing in national chains will drive more and more of the mom-and-pop businesses out, and Carytown will be no different than Short Pump or Stony Point.

To the people that have some sort of disdain for “national chains”….does it ever occur to you that local people own and work in that business? They, in turn, take the money that they earn and spend it right down the street in the neighborhood they live in. I used to work for Starbucks in NYC and people would say that stuff to me and i thought “well, I’m local. I live in the same building you do.” If I am not mistaken, anybody could have rented that building to put a “local” business in it. Why didn’t you guys?… Read more »

As a matter of fact, my husband has owned 3 businesses in the Carytown area over the years, so I do have my money where my mouth is, so to speak. And yes, I have taken risk too. So I think I’m qualified to comment on local versus national chains.

I don’t think i ever said Mary was unqualified to make any statement. I simply asked why the disdain? Still not answered. Maybe the people who work at Jimmy John’s would walk out of work and go spend money in your business. Or the customers that it brings might do some window shopping on the way back to their car. And, if i read the article right, the owner of this business is a local attorney (i think it was in the title)…so, is merely buying an established franchise model an issue with you?

Maybe I’m missing something. Were there other, more local businesses looking to rent the space for more than Jimmy John’s did?

I didn’t even know there was a Starbucks in Carytown now. Good thing I quit going there I guess. Now how does this attorney have time to engage in all of these enterprises? The attorneys I know work long hours.