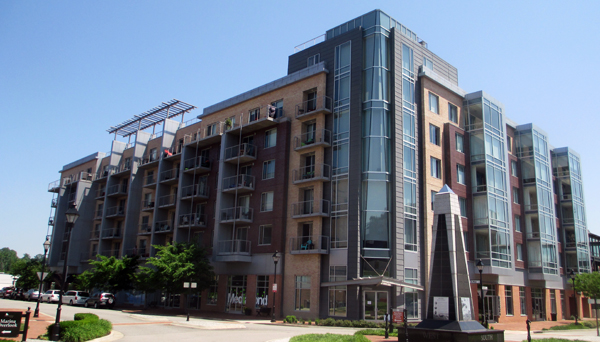 9 units are were auctioned off at 210 Rock. (Photo by Burl Rolett.)

A new wave of homeowners will soon descend onto Rocketts Landing after getting sweet deals on condos at an auction last week.

The sale took place May 20 in front of a standing-room-only crowd at the Westin Hotel in Glenside. WVS Cos., the developer of Rocketts Landing, unloaded 28 unsold condos; 23 at auction and five more in conventional sales immediately after.

All told, the event brought in more than $6 million.

And while the Rocketts sales figures left some existing neighbors uncertain about near-term effects on their property values, a Rocketts developer thinks the auction may set a steady tone on values at the riverside village going forward.

The least expensive Rocketts condos sold at auction for about $150,000, nearly $50,000 shy of their latest asking prices. Several condos went for $100,000 less than previous asking prices, and none came within $40,000 of the latest sticker price.

Those sales figures are new baseline values that WVS’s Richard Souter thinks will be the starting points for recovery now that the market’s supply has been entirely depleted. Still, he admits owners looking to sell right now could take a hit because of the auction prices.

“If you’re trying to sell your unit today, a new market price has been set which is slightly lower than your expectations, and we’re obviously apologetic about that,” Souter said. “If you’re a holder of units for more than a couple of years, I think values are really going to come back.”

Realty agent Lacy Williams of Joyner Fine Properties is marketing one Rocketts Landing condo and a pair of nearby condos at Vistas on the James. She watched immediate interest in those units plummet once the auction was announced.

“When I first heard about the auction, I emailed my clients and told them that I thought showings would be slow until after the auction,” she said. “And they were.”

Sharon and Gary Hall sold their two-bedroom Rocketts Landing condo in February. The fifth-floor corner unit drew $359,000. The Halls sold the 1,700-square-foot condo for $15,000 less than what they paid two years earlier.

After hearing the final auction figures, Sharon Hall was happy they got out when they did. Similar units – the Halls had what Rocketts called a class “C” condo – sold for $278,000 and $282,000 at the auction.

“We were lucky to have sold when we did,” she said. When the auction was announced, she added, “I felt that if I was still a resident there, I would have been very disturbed. I felt that it might compromise prices in a negative way.”

A mixed-use development that has been taking shape near the Richmond-Henrico line for half a decade, Rocketts Landing brought its first four condo buildings to market – 248 units – over the course of 2007 to 2009.

Sales were strong at first, and WVS presold every unit in the Cedar Works building and the twin Fall Line and Sky Line condo buildings. About 25 percent of the condos in a fourth building, 210 Rock, were also spoken for.

But as the recession took hold, buyers backed out of presale deals leaving only half the units sold by the time construction ended. Over the last five years, WVS whittled down the number of unsold units before deciding this year to move to auction. The firm closed out Cedar Works in conventional sales and sold the last bits of 210 Rock at the auction. Sky Line and Fall Line still have a cluster of developer-owned units remaining.

The Central Virginia Multiple Listing Service shows eight lived-in condos at Rocketts currently up for resale. Of those, four are in the Sky Line building, three are in Fall Line and one is in Cedar Works. Most of those condos are too dissimilar to usefully compare to auction units.

The Rocketts condo that Williams is selling is a “C” unit in Fall Line, similar to the Halls condo and four others that sold on Tuesday. Williams is asking $369,900. She’s now contacting her client to discuss lowering the price.

But Williams said the sell-off wasn’t a disaster for Rocketts resales. 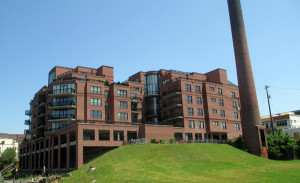 She was pleasantly surprised by prices in the first half of the auction. (In the second half, she was helping another client who won a unit at auction.) Most of the high bids Williams saw brought values 70 to 80 percent of the last asking prices.

The first sale of the night was at 83 percent of the most recent asking price, while the last of the evening drew 63 percent. Realty agents look for 90 to 95 percent of asking prices in conventional condo sales.

Tiffany Hite Stevens, a Keller Williams agent who is marketing a ritzy Rocketts condo for more than $2.7 million, said she doesn’t think values at Rocketts will suffer in the short term.

She added the auction will allow WVS to focus on developing the next phase of Rocketts – a set of high-dollar townhomes, a $20 million apartment building and a new row of waterfront restaurants that likely only stand to drive up property values at Rocketts.

Souter said the decision to unload the Rocketts condos wasn’t taken lightly. WVS discussed the move with current residents before settling on the auction process, and Souter said the firm found many weren’t planning on selling anytime soon.

“There were a good number of empty nesters who said, ‘I’m not leaving so it doesn’t really affect me,’” he said.

Souter said he anticipates that at least 12 of the 14 remaining WVS-owned units at Fall Line and Sky Line will close out over the next two weeks at auction prices. The other two are larger units that Souter said may take a little longer to move.

Current residents who bought in at a higher level in the past haven’t been alone in watching their resale values drop. WVS itself unloaded condos at a loss last Tuesday.

Souter, however, said that might simply be what those condos are worth right now, regardless of how they’re sold.

“The market value is down from everyone’s expectations and from where they started, but it’s hard to say an auction doesn’t render a true market value,” he said.

If you think these or any other Developers or Homebuilder cares one bit about you or your property value once you close on a deal you are sadly mistaken. I spent 25 years in the business and watch buildera intentionally mislead the county and public with dreams of grandeur only to go back once a project does not meet financial expectations and pleade poverty……Its a joke and local government is equally responsible for not doing their due diligence…..