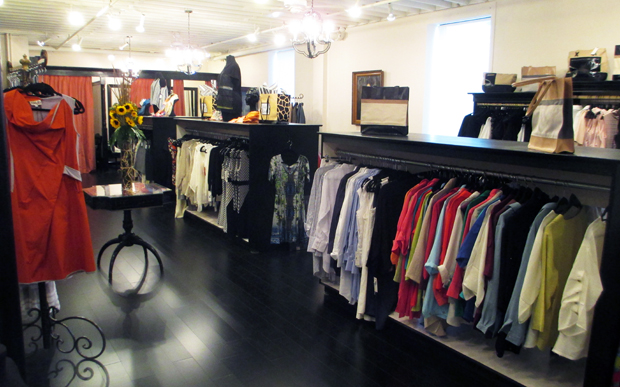 A Williamsburg boutique is expanding to Richmond, joining a collection of retailers that are in the midst of musical chairs in a former Carytown church.

The Jazzy Giraffe opened May 15 at 3325 W. Cary St. Owners Donna and Thomas Wright signed a three-year lease for the 1,200-square-foot space.

“The businesses are all conducive,” Donna Wright said. “Women love to come and shop and have their hair done and look at Martin’s things.”

The Jazzy Giraffe moved into the first floor of the old Annette Dean Women’s Wear shop, which closed earlier this year. Martin Interiors is moving to the second floor. The C Street café is expanding into space formerly occupied by Martin Interiors. A $13,000 building permit for the restaurant space was applied for in April, according to a city record.

The property, formerly home to Calvary Baptist Church, had been put up for sale for $3 million as Annette Dean began winding down. Karina Slaughter of Karina’s Salon, Martin Rubenstein of Martin Interiors and Annette Olsen own the building. Slaughter said the property is no longer for sale.

Wright said Slaughter, a customer at the Williamsburg Jazzy Giraffe, “was very instrumental” in bringing the shop to Richmond.

Jazzy Giraffe sells women’s clothes and accessories. Wright, 50, launched the business 12 years ago in Asheville, N.C., before moving it to Williamsburg’s Merchant Square in 2011.

Wright said she imports items from Canada and Europe. The Jazzy Giraffe tries to carry items in a variety of prices and sizes. Prices range from $75 to $2,000.

Outside the building, Wright will have plenty of neighboring competition. Cíao, a women’s clothing store, moved in March to 3409 W. Cary St., just two blocks from The Jazzy Giraffe.

While Jazzy Giraffe and Ciao illustrate the upside of the Carytown churn, other shops have recently seen the downside. Champagne & Shoes at 3004-B W. Cary St. closed earlier this year. Pink at 3158 W. Cary St. was in business for more than 30 years before closing up shop. Its space was snatched up by a larger chain a few weeks later.

Still, Wright knows there’s only so much a retailer can do.

“The point of retail isn’t to reinvent the wheel,” Wright said. “It’s to do something different.”