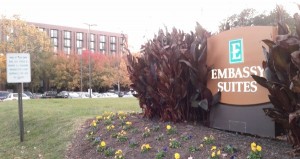 The Embassy Suites hotel near West Broad Street and Glenside Drive, which is facing foreclosure, was financed by a CMBS loan. With CMBS loans bouncing back, it could help local hotel, office and warehouse buyers. (Photo by David Larter)

A 225-room Glenside-area hotel went back to its lender in a foreclosure sale Friday but not before a Richmond hotel giant took a run at the property.

Rockwood Real Estate Advisors, the note holder on a $33.6 million loan backed by the property, foreclosed May 30 on the 225-room Embassy Suites at 2925 Emerywood Parkway. The lender took the hotel at a high bid of $18.1 million after Richmond-based Shamin Hotels dropped out of the two-bidder contest in front of Henrico County Circuit Court.

The lender opened bidding at $15 million, and as the auction began it appeared the bank would take it back for that price. Then Neil and P.C. Amin of Shamin Hotels arrived as the trustee read the rules of the sale aloud. They anted up with a $100,000 cashier’s check and entered a bid of $15,000,100.

Shamin owns about 25 hotels between Petersburg and Ashland but does not have one in the Glenside area. Shamin’s nearest holding to the Embassy Suites is the Comfort Suites at Innsbrook.

The hotelier and the lender went back and forth, inching higher first in $100 increments and then at $100,000 each time until an $18.1 million bid won the auction for the lender.

The Embassy Suites sits on 5.7 acres less than a half-mile off West Broad Street. It’s in the middle of a competitive Glenside-area hotel market, where at least 17 hotels operate within two miles of each other. The Glenside area has added 195 rooms in the last five years and has another 119-room extended-stay hotel in the works.

The Embassy Suites was previously owned by Crescent Hotels. The Fairfax-based hotelier paid $39 million for the 185,000-square-foot hotel in 2007, according to county records. Crescent’s original $33.6 million loan was issued in May of that same year. The property is assessed at $15.3 million, less than half of the $30.8 million assessment it rated in 2009.