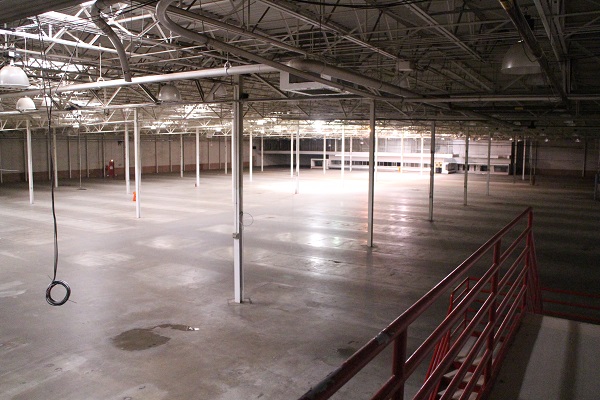 Journey Church hopes to move into the former Costco by 2017. Photo by Burl Rolett.

The vast, vacant big box storefront on Hull Street Road is beginning to show the ill effects of nearly three years of neglect.

The roof leaks in several places, a problem made obvious during Thursday afternoon’s driving rain. In more than 100,000 square feet of space only one light switch works, one of the building’s new owners joked. It’s difficult to see the warehouse’s farthest corners from the front of its single, empty room.

But despite its defects, the former Costco on 3700 Price Club Blvd. offers a blank 111,000-square-foot slate for its new owner.

Journey plans to transform that shell into its new megachurch with the goal of holding services by Easter 2017.

James Brummett, Journey’s lead pastor, said the Costco property has been empty since the wholesale club left the building for its larger store near Chesterfield Towne Center in 2011. 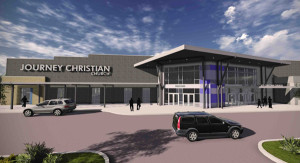 A rendering of Journey’s Church’s vision for the property.

The non-denominational church started seriously considering the Costco building last year after deciding to move out of its 25,000-square-foot campus near Brandermill, which it is currently looking to sell.

It first looked for buildable land, but Brummett estimated that building from the ground up could set the church back $17 million to $20 million before they could hold even their first service.

“I want to put as much of the resources we have into the ministry,” he said. “I don’t want to pour millions and millions of dollars into a building.”

Brummett liked the Costco building’s location near three interstate access points. He said revamping the existing structure will be much less expensive than building new, but he wouldn’t reveal the church’s renovation budget.

The church was ready to make an offer last July, but the property was under contract to another potential buyer. Journey waited the deal out, and the contract eventually fell through. The church submitted its letter of intent just hours later.

Brummet said the congregation comprises more than 1,000 people easily, a much larger crowd than they can accommodate at their Old Hundred Road South campus.

The church holds Sunday services at nearby Clover Hill High School. Every weekend they set up and tear down what Botset called a “mobile church.”

But Journey isn’t in a hurry to leave the high school. Brummett said the flexibility in the Clover Hill arrangement allowed them to wait for more than a year before finalizing the Costco building deal, and it will let them take their time renovating their new church.

They’ll build out in phases, he said, to keep from overextending the church financially.

“It’ll be built so we can knock down a wall during the week, add a few more seats, and then when you show up the next weekend, we have a little bigger auditorium,” he said.

The finished product will have a maximum 1,500-seat auditorium for church services. Brummett anticipates the rest of the building will be used for children and student activities and meeting spaces.

He wouldn’t say precisely how the project will be funded, but some of the funds will come from the newly launched ImpactRVA campaign, a general fundraising drive to support all of Journey Church’s operations. They bought the Costco property with a loan from Park Sterling Bank, a debt Brummett hopes to pay off in the next two years.

Key Architecture is designing the project, but Botset said the church is still in the first stages of design.

Zach Grabill, a member of the congregation and a real estate attorney with Kaplan Voekler Cunningham & Frank, assisted the church throughout the purchase. The revamp, he said, won’t leave a hint of the building’s old retail shelves.

“It will bear no resemblance on the inside to this warehouse,” he said. “You won’t be able to even imagine that it was ever that.”