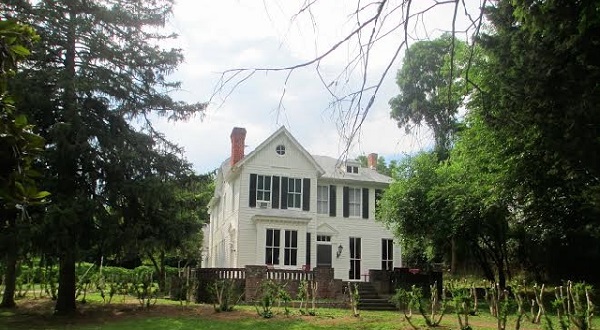 The 125-year-old Marburg House at 3020 Rugby Rd. will be restored and get new neighbors as part of an agreement between the house’s new owner and developers. Photo by Brandy Brubaker.

After garnering support with a Facebook campaign, a Richmond resident convinced a team of developers to change their plans for a 19th century home next to Byrd Park.

But William Lipps made it his personal mission to save Marburg House and the developers then agreed to sell him the home and a slice of its lot for $605,000. Partridge and Slack will now build four new houses on the rest of the property.

“It had been on the market for a long time before we bought it,” Patridge said of Marburg. “Initially, we didn’t feel there was an interest in it, but then we had someone come to us and want to buy it.”

Castle Kanawha, which had owned the property for about a year, expects to start construction on the four new houses in the next two or three months in a subdivision to be called Carillon Place.

Partridge, a Realtor with One South Realty, said they’ve selected local builders Ellington Homes and HomeKeepers for the project. David Johannas, of Johannas Design Group, and Christopher Edsall were hired as architects. First Capital Bank is financing the project.

As for Marburg House, it is in the midst of a gentle restoration. 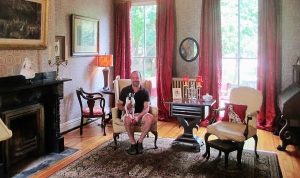 Lipps, a doctor of pharmacy at the Veterans Affairs Hospital, deliberately uses the word “restored” rather than renovated or remodeled because he aims to keep as much of the home’s original character intact as possible.

“When you walk in, it feels old. It feels grand. That’s hard to find,” Lipps said. “I definitely want to keep the old feel, and I’m probably the only person in the world that wants that anymore–everyone wants sparkling new.”

Lipps said he had been looking at Marburg House for some time, but the initial 2012 asking price of $1.2 million was too high.

The house hadn’t been well maintained and the boxwoods that line the front walkway were massively overgrown. Lipps said it was “filthy,” but structurally sound.

He said he hasn’t set a budget for the project, but estimated that he’ll probably spend $80,000 just to restore the home’s exterior. His contract with the developer stipulates that he will restore the landscaping and exterior within a year.

He credits Troy Sponseller, Ira Applegate and Joyner Fine Properties Realtor Betsy Dotterer for their help in the process.

Lipps said Marburg House is the oldest standing residence in the Carillon neighborhood. It was built for Charles and Augusta Euker. Charles Euker, who named the house after his German birthplace, was an officer in the Confederate Army during the Civil War and ran a Richmond saloon and billiards hall, Lipps said.

This is the third historic house Lipps has restored, and he says he’ll live in this one forever.

The house is gorgeous, and I am thrilled to see that it was saved from demolition. I prefer the grand old houses to the sparkly new ones too. Good luck with the restoration!

How lucky for Marburg and the Carillon neighborhood to have such a tireless preservation advocate and loving steward as Bill Lipps. (And Ira. And Troy…) Here’s to a new [long and prosperous!] chapter for this old house.

Be sure to check out the complete history of this property at http://www.marburghouse.com

Great job Bill and everyone else involved. Compromise really does work.

Thank you for the article and kind comments. I just want to add that ‘Historic Richmond’ was also an integral part of this effort. They helped build the bridge between me and Castle Kanawha to make this plan a win-win for all.

What a delightful story! So happy this house has been saved. It is not like any other home I have seen in Richmond so glad it will be around for us to enjoy.

Sad to see it lose its idyllic setting but very thankful the house will be spared. Very cool place. Good luck

Thank you so much for posting this update. I used to live near this house and have “loved it from afar” for many years.

This is fantastic news! So glad the house will remain & be restored – what a great piece of Richmond history!