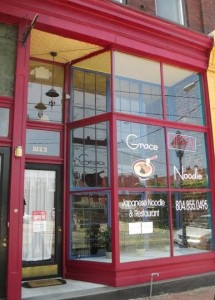 Grace Japanese Noodle is open Monday to Saturday from 11 a.m. to 9 p.m. Photo by Michael Thompson.

A local couple is bringing a bite of Japan to Shockoe Bottom.

The first-time restaurateurs learned their trade in Japan, where they worked for 10 years in a noodle shop. Phaw said he and his wife saw an opening in the Richmond dining scene for Japanese food.

“In Japan and New York (Japanese restaurants) don’t have to advertise,” Phaw said. “But here, I think some people might not know what Japanese noodles are.”

Phaw said that they make the noodles fresh every day.

The couple came to the U.S. in 2003 and began working around the country in the food industry, including as sushi chefs in a VCU cafeteria.

Opening a noodle shop of their own has always been their goal.

Lay said she found the East Main Street property a year ago on Craigslist. She and Phaw signed a three-year lease for the 1,600-square-foot property that is owned by Louis Cowardin, according to a city record. 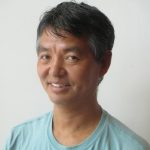 Phaw wouldn’t say how much it cost to open Grace Japanese Noodle, but he did say the venture is being financed with help from family.

Phaw said the name “Grace” refers to the divine help he called upon to open the restaurant.

Their shop is the latest participant in what appears to be a noodle trend in Richmond. Several noodle-focused eateries have popped up around the city in recent months.

Chris Tsui and his EAT Restaurant Partners opened Foo Dog at 1537 W. Main St. in the Fan in April. Part of the Asian restaurant’s menu is devoted solely to ramen.

Phaw and Lay’s addition to the Shockoe Bottom scene comes days after Julep’s, a mainstay in the neighborhood, announced it will move west into downtown.

The owners behind Cha Cha’s Cantina and Society are working on re-opening a tapas restaurant in the area. And a specialty grocery store and South American restaurant opened a few weeks ago.