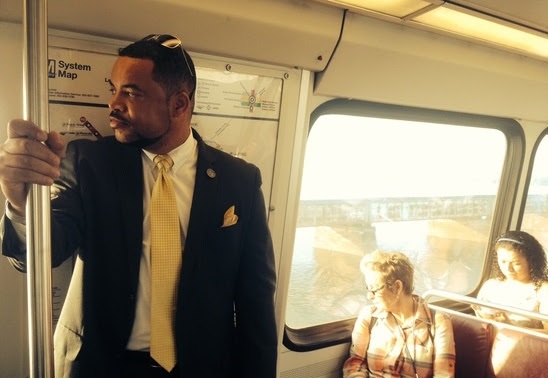 Thurmond Alford’s uses his own car, a ride sharing program and the D.C. Metro to complete his daily 3 1/2-hour commute to Washington. Courtesy of WTOP.

Next time you’re stuck in rush hour traffic and your blood pressure starts to rise, take a breath and think of Thurmond Alford.

Alford lives in Chesterfield County, but works at the U.S. Department of Justice in Washington, D.C. That calls for a 3½-hour commute of more than 120 miles. And that’s just one way.

Alford said he’s put 27,000 miles on his 2014 Mazda 6 in just seven months, and he only drives part of the way before hitching a carpool ride and taking the D.C. Metro.

“If I make all the right connections at all the right times, it’s 3½ hours,” Alford said. “I literally go through 11 counties, cross four rivers and three major cities.”

Alford’s commute is so hellish he was chosen last month by Washington radio station WTOP 103.5 FM as the winner of its “Commuter Idle,” a contest for “listeners experiencing the daily horrors of commuting in and around Washington,” the station said. As a prize, Alford got a limo ride to and from work one day and $1,000 for gas.

Alford is well prepared for his daily travels. Courtesy of WTOP.

Alford, 44, is surprisingly upbeat for someone who has been on the road seven hours a day for 12 years.

“Everybody has a monkey on their back– an issue they have to deal with,” he said. “My issue is my commute, and I accept it.”

Here’s Alford’s workday in a nutshell:

He wakes up at 3 a.m., gets ready and leaves the house 45 minutes later. He makes a quick stop at a convenience store for some tea, a snack and a little neighborhood chitchat. From there, he drives 1½ hours to a Garrisonville, Va. commuter lot.

“Basically, you stand in line in the heat of summer, the cold of winter, rain, snow. People come by. They pick you up because you need three people for HOV lanes,” Alford said.

The so-called “slug lines” are organized by destination, mostly to D.C. government buildings or Metro stations. Alford, a father of two and husband of a VCU professor, stands in line for the Pentagon.

“I met a two-star general through slugging,” he said.

After he’s dropped off, he walks to the Metro station, gets on a train, and makes one line transfer before disembarking around 7:30 a.m. Then, he walks a couple more blocks to the U.S. Department of Justice, where he works as a program manager.

He typically arrives back in Chesterfield County by 7:30 or 8 p.m. One night, because of traffic jams, his commute home took more than six hours.

Alford estimates he spends about $45 every three days for gas – he chose his current car based on its gas efficiency and reliability. The DOJ reimburses him for his Metro cards. He gets an oil change every three weeks at about $70 a visit, and once a month he gets a $40 tire rotation to keep his car running smoothly.

Despite his many hours behind the wheel and his annoyance with slow drivers in the fast lane, Alford said he no longer gets road rage.

“I did at the very beginning, but I developed patience,” he said.

Alford said people often ask him why he doesn’t move closer to work.

“I was born and raised in Richmond,” he said. “I love Richmond.”

And he said he loves his job in D.C. “tremendously.”

He’s found ways to make the best of his time. The 1997 VCU graduate uses his morning drive to prepare himself for the day and records his thoughts on his cell phone’s voice recorder. He listens to about five books on tape a month. Dan Brown, author of “The Da Vinci Code,” is one of his favorites.

“I do a lot of things while I’m driving. I listen to books on tape. I call people,” he said. “I am pretty productive on my commute.”

Alford has plenty of tips for making the best of a commute. He suggests a well-designed commuter survival kit. Alford’s has maps, family members’ telephone numbers, a spare train ticket, water, a first-aid kit and a change of clothes, among other items.

He said the other two important things to remember are time management and a positive attitude.

Does anyone else in BizSense nation have a commuting tale to tell? Please share your stories in the comments section below.

I can relate to him. I also commute to DC but from Richmond, not from Chesterfield; so my commute is not 7 hours but is around 5 to 6 hours a day depending on the traffic. Audio books and MiFi keeps me connected so I could catch up on pending tasks. Richmond to Fredericksburg is a piece of cake – takes around 50 minutes but from there until we get on the HOV (exit 150) is a bear! Sometimes it takes 45-60 minutes just to travel those 25 miles. Commuting back to Richmond is also pain along the same stretch… Read more »

Did it from Richmond for 2 plus years until my back would not let me continue! Go Forward Road Warriors. Bring us High Speed Rail!

I live in Richmond and have commuted to Stony Creek, VA everyday for the last year. From my house near Stony Point to my office is 48 miles that I can drive in 45 minutes. In contrast, on the mornings I have driven to Innsbrook for networking events, it takes me over 30 minutes to travel only 11 miles. The mileage is tough on my car as I drive about 30k miles a year, but there is little traffic on 95 going south and a good chance to make calls, prepare for the day, and listen to the Economist audio… Read more »

I live in Chesterfield VA, I commute everyday to clinton Maryland. I get up at 4am and get back to Chesterfiekd every evening around 7:15-7:30pm

I’ve commuted from Chesterfield to the D.C. metro area for over four years. After using carpools and vanpools I find that Amtrak is the most efficient mode of transportation for me. I can use WiFi to work on my way in and be productive. Furthermore, in the evening coming home I can relax and appreciate the scenery. I get home rested to enjoy my family, exercise or even mow the lawn.

I’m just starting the Chesterfield to DC commute any tips on using Amtrak?

Anything more than a 2 hour total round trip commute each day is ridiculous. Even that is a bit much. Where is your quality of life? What a shame, smh.

Twenty minutes is about the most I want to commute on a daily basis. As a Substitute Teacher in Fayetteville, NC, I have to drive all over the county, since public transit is “useless” for where I have to go. Up north I went 4 years without a car, and had great public transit!

I was looking around for inspiration to justify my 3 hour commute to DC. And here it is! Funnily enough, I, too, live in Chesterfield.

Whats the point of “living in Richmond’ when you never get a chance to live there?