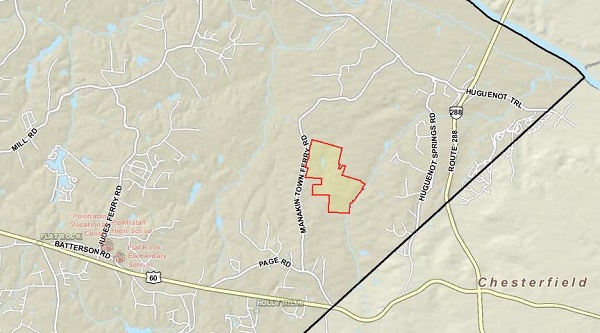 David Sowers bought about 450 acres in Powhatan County, about a mile from the Chesterfield County border, to split up and sell as parts of a new development called Watkins Mill. Courtesy of Powhatan County.

A member of a well-known family of Southside developers plans to slice up a big piece of Powhatan property.

He plans to divvy up the property into lots of about 10 acres each, install state-approved roads where needed and then sell the lots individually. He’s named the subdivision Watkins Mill after a Civil War-era sawmill that was once located in the area. 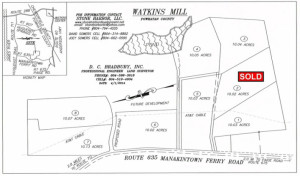 Eight 10-acre lots on the Watkins Mill are for sale. Courtesy of Stone Harbor Development.

Sowers said the wooded lots will vary in price depending on their location and topography, but estimated that most will fall between $130,000 and 160,000.

Eight lots along Manakin Town Ferry Road are already up for sale, and two of those are under contract, Sowers said. The other lots will be available as roads are installed. He estimated that Watkins Mill will have a total of about 40 lots.

The eastern Powhatan County property is zoned for agricultural use. Sowers said it would allow a buyer to build a house in a rural setting or own horses, for example.

Sowers said he’ll finance the project through a combination of personal funds and a loan from First Capital Bank.

Sowers purchased the tract of land from RZB Properties LLC, which was represented in the sale by David Smith of Cushman & Wakefield | Thalhimer, according to a Thalhimer press release.

Some of Sowers’ other projects include the Brattice Mill and Stone Harbor subdivisions in Chesterfield County. He also did Southport Industrial Park with his brothers and fellow developers Mark Sowers and the late Buddy Sowers.