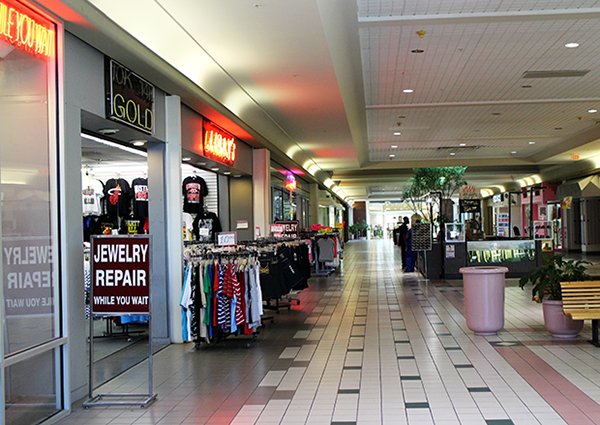 An Arizona developer plans to build a new retail complex over the run-down Fairfield Commons mall. Photos by Michael Schwartz.

An Arizona developer is rolling out plans to demolish a struggling East End mall and build a new open-air retail center.

Bromont Investments is under contract to buy the Fairfield Commons mall on Nine Mile Road in a deal expected to close this fall, said Joshua Rector, director of development for the Scottsdale, Ariz.-based firm.

The company plans to raze the 46-year-old shopping center to make way for about 300,000 square feet of retail space at a new complex dubbed Eastgate Town Center.

“The existing structure is just kind of past its prime. It’s a very tired structure, and it needs to be replaced,” Rector said. “The demographics are right and prime in an underserved retail area, so we thought it was an absolute home run from a redevelopment standpoint.” 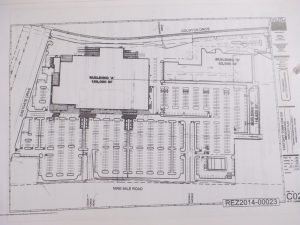 Eastgate’s anchor space is planned to be almost 190,000 square feet.

Eastgate Town Center will be made up of four free-standing retail buildings. Rector said the company hopes to close the purchase of the property in the fall. He said he is “slightly optimistically” hoping to open the new development by fall of 2015.

A site map submitted for the project to the Henrico County Planning Commission in May shows a 190,000-square-foot anchor, a second 82,000-square-foot building and a third 15,000-square-foot structure. Rector said a fourth outparcel building, which is not labeled in Bromont’s rezoning application, will bring the center’s total size under-roof to close to 310,000 square feet.

A rezoning case for the project is scheduled to go in front of the planning commission next month.

Eastgate Town Center will include both single- and multi-tenant buildings. Rector said the company has reached out to grocery and general merchandise retailers that could fill the roughly anchor slot, but no leases for the property have been finalized.

Email correspondence included in the county planning commission’s rezoning file says a large retail tenant at Eastgate is seeking permission to operate 24 hours a day. Rector added that several of his potential tenants are interested in staying open around the clock.

Rector said that CBRE | Richmond broker Rob Black, who is representing Bromont in its purchase, led the development company to Fairfield Commons. Bromont put the land under contract about a year ago. 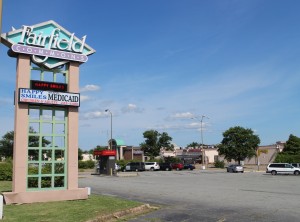 About half of Fairfield Commons mall’s retail space is sitting empty.

The mall is currently about 55 percent occupied. Major tenants include Peebles, Citi Trends and Maxway. Rector said Bromont has approached several of the mall’s current retailers about taking space in the redeveloped shopping center.

The property is currently owned by Chiocca-Talley Malls Inc., according to Henrico County records. Colliers International brokers Yasmine Hamad and Brian Glass are representing the seller in the transaction.

Eastgate would be the third major redevelopment project in the works for a Richmond-area mall property. Kroger anchors a sprawling mixed-use complex taking shape at the former Cloverleaf Mall and Martin’s had its eye on anchoring a potential retail and residential redevelopment at the former Azalea Mall site earlier this year.

Eastgate will be Bromont’s first development in the Richmond market and its only holding in Virginia. Rector said he hopes it will spur further redevelopment along Nine Mile Road in Richmond’s East End.

“I think this is the first major step of many to come,” he said. “I think this is a great area that has been in recent years overlooked by many in the region, and I think people will be very surprised at what a great power center this can be.”

In the East End of Richmond, we really need a Walmart, we all have to go to the next county which is Hanover to go that Walmart, so Please consider this option for all of us..It would be in alot of revenue for the County of Henrico..Thank you..

So based on the plans in this that Peebles is closing and this is being redeveloped into a traditional shopping center.

I thought most department store parcels were either owned by the store or a 3rd party outside the malls owners?

I would also like to see a movie theater and mini golf.

If the East End had a Walmart it would help a
a lot of people. Since gas prices rather go up
than down .Walmart is to far out in Mechanics
ville.I dont drive there anymore.

Looking forward to this,only about 20 mins away.

I heard Walmart is coming in there.