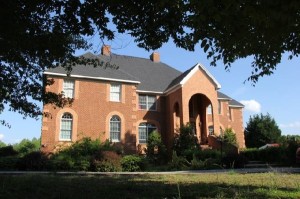 An unnamed buyer bid $800,000 on the riverfront mansion. Courtesy of Tranzon.

A riverfront New Kent County mansion has found a buyer at auction – as long as a judge OKs the sale.

The 10,000 square-foot home received a high bid of around $800,000 at auction Tuesday, said Linda Terry from the auction company Tranzon.

The mansion, which sits on a 1.8-acre lot along the Chickahominy River, has an assessed value of $1.2 million, Terry said.

The sale was a court-ordered division of the owners’ assets. So now the deal has to get a judge’s approval.

Terry said she’s confident the deal will get passed by the judge.

Terry declined to identify the winning bidder but said he is a local business owner.

Built in 1997, the home is about 12,000 square feet after upgrades and has 8 bathrooms. There’s also a pool, water slide, pool house and dock with powerboat and jet ski lifts.

No date has yet been set for the second part of the judge’s ordered auction. A cache of classic cars will be sold online through eBIDLOCAL.com.

I attended the auction and we found the property to be deplorable unkept. The auction was a result of a court ordered sale related to a divorce and the husband and current occupant was the successful bidder.

I was the broker in charge for this auction; I completely agree with Gary’s comment about the condition of the property; the house easily needs $150,000 or more in repairs and renovations. The current occupant was NOT the successful bidder for the property. A third party buyer registered, bid and signed the auction contract.