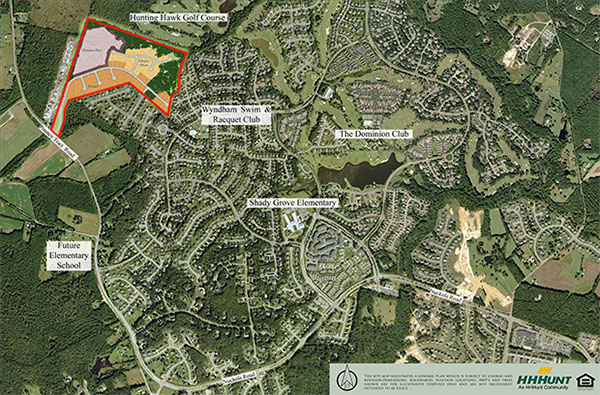 HHHunt will add the Dominion Park neighborhood to the northwest section of the Wyndham community.

Developer HHHunt plans to break ground in September on a new section within its sprawling Wyndham community.

HHHunt selected Boone Homes – a builder it works with frequently in Wyndham– to build the new houses in Dominion Park.

“It’s somebody who wants the opportunity to live in Wyndham and have a smaller house and a smaller yard to get started,” Owen said.

HHHunt Vice President of Development George Moore said he thinks the neighborhood will also attract empty-nesters looking to downsize – maybe even those already living in Wyndham.

“We started developing Wyndham in the early 1990s,” Moore said. “Some of the folks have been in their homes 15 or 20 years and are looking for an opportunity to move down, and they want to stay in Wyndham.” 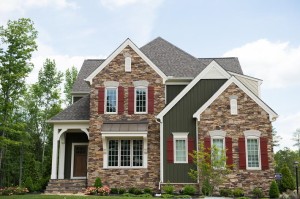 The Dominion Park homes will be modeled after plans for the Ellington houses. Courtesy of Boone Homes.

The houses will be smaller versions of models in Wyndham’s in-progress Ellington and Ellington Woods sections. The two Ellington areas, along with Dominion Park, are being built on a 77.5-acre parcel adjoining Wyndham that HHHunt acquired in 2007 and held onto during the economic downturn.

Boone Homes is financing its projects with Bank of America. HHHunt will use a mix of bank financing and its own equity for Dominion Park. Boone estimates that the neighborhood will cost $2.7 million to develop.

Dominion Park will be rolled out in two phases. Moore said Boone Homes hopes to start building the first houses there in January.

Work on Ellington Woods started in November. Owen said six homes in that section are under contract to date, and the first sale will close July 17. The neighborhood has larger lots – 29 in total – that are up to a half acre in size. The homes there are custom-built and sell for $700,000 and up. Houses currently being built are priced from $900,000 to more than $1 million, Owen said.

HHHunt began Wyndham in 1991. The 1,351-acre community was designed to accommodate 2,400 units, which includes houses, townhouses, condos and apartments. It has the Dominion Club as a centerpiece, among other amenities.

As for the future of Wyndham, Moore said HHHunt has stashed away about 100 acres just over the Hanover County border from its original Wyndham property purchase. There are no plans for its development for the time being.