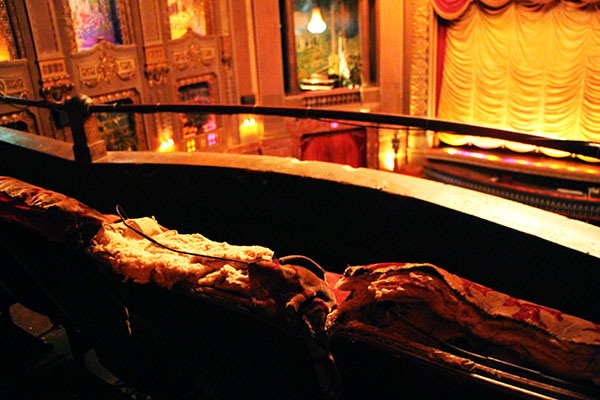 A priority on the Byrd Theatre Foundation’s to-do list is replacing the theater’s 1,300 seats. Photos by Evelyn Rupert.

The Byrd Theatre Foundation is in the middle of a $5 million capital campaign to restore the 85-year-old Carytown movie house to its original grandeur.

The nonprofit foundation, which owns and operates the movie theater, has already raised $1.5 million toward its goal. That has been put toward installing a new roof, a new boiler and a digital server, among other projects. The foundation also plans to use some of the money it raises to pay off a $1.2 million loan for the purchase of the theater.

High atop its list of repairs is the full restoration of the Byrd’s iconic Wurlitzer organ – to the tune of $650,000.

The foundation has financed minor fixes to the Wurlitzer organ over the years to keep it running for its weekly Saturday night performances. But much more work needs to be done. 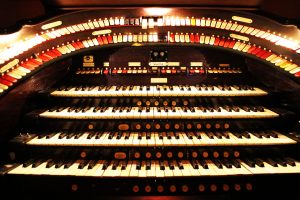 The organ console is raised from below the stage and controls instruments hidden above the theater.

“We haven’t had a whole lot of money to go thoroughly repair it,” said Bob Gulledge, the Byrd’s organist. “The things that needed done to still play it, we’ve done. There’s still a lot to do … It used to be for the past 50 years or so, you could put a patch on it and go from there, but we’re past that now.”

The organ has been an institution at the theater since it opened in 1928, during the days of silent film.

“The Wurlitzer was designed to be able to play the score – not just the music but all of the sounds,” said Colleen Flynn, who serves as the foundation’s secretary. “Like a plate breaking.”

The organ console itself sits on the theater floor but its piping, wiring and a range of instruments and other items that produce its sound effects occupy several rooms above the screen. The sound effects aren’t digital, so if the organ plays a whistle sound, it is made by an actual whistle in the rooms above. Same goes for a clarinet or a saxophone or a drum. It even has a grand piano hooked into the system.

“A man once said to me, ‘I didn’t know Wurlitzer made an organ this big, where are its speakers?’” Gulledge said. “I said, no, everything is acoustic.”

The pipes and wires that connect the organ to its upstairs band need to replaced, and all that work will be done gradually.

Gulledge said the repair work is expensive because it is so intricate and because so few people have the specialized skills to do it anymore. The closest specialist is in Indianapolis.

“There are thousands of components, literally,” he said. “There are no more quick fixes. Something can be out of adjustment just a quarter of a screw and it fouls everything up. It takes that level of expertise.”

In the early 1900s, Gulledge estimated that there were at least 19 Wurlitzer organs in the Greater Richmond area alone. Now, there are probably less than 100 in the United States and only a dozen or so that are still in the same theaters the factory originally installed them in. Radio City Music Hall in New York is among them.

The seating fix, although the patrons’ most requested repair, has to be done last as to not damage the new seats during the other, messier work, the foundation said.

The foundation purchased The Byrd Theatre at 2908 W. Cary St. in 2007 to save it from irreparable damage that could have been caused by a badly leaking roof. It paid $1.2 million and bought the theater from the Samuel Warren family.

It is now in the middle of replacing the theater’s air-conditioning system, which foundation board member Melissa Savenko joked had been “held together by bubble gum and wire” until it broke last year.

According to Guidestar, the nonprofit foundation reported revenue of $176,776 and expenses of $63,698 in a 2012 IRS filing, the most recent year available.

A ticket currently costs $1.99. The board said it is considering raising the price to $3 or $4 a ticket to help the theater become more financially sound. 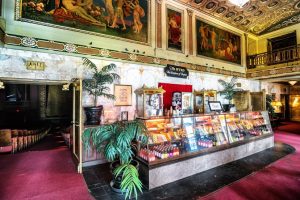 The walls of the Byrd’s lobby and auditorium are covered with Greek mythology-themed paintings. Photo by Bill Dickinson, courtesy of the Byrd Theatre Foundation.

The Byrd’s seating capacity is 1,300 people. Last year, the theater sold more than 137,200 tickets. Saturday night is its busiest night.

Todd Schall-Vess, the Byrd’s general manager, is the theater’s only full-time employee, and he manages about 20 part-time workers. He said all of the repairs and renovations are necessary to keep the theater going for generations to come.

“We still are doing today what the Byrd was designed to do 85 years ago,” he said. “How many things can you say that about?

Flynn said the theater is a community icon.

“It’s not the same experience as going to a chain movie house,” she said. “You see the ornate details. You hear the organ playing. You see the curtain going up. It’s an experience.”