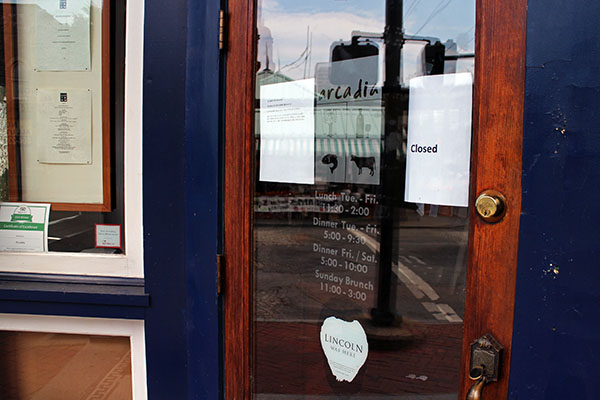 Arcadia, which closed on June 22, recently filed for bankruptcy. Photos by Evelyn Rupert.

Arcadia shut down on June 22, the filing shows.

The business closed with $264,000 in debt. It owed $14,000 to its landlord, and other creditors include food and equipment vendors and utility providers. It also owed $12,000 in Richmond city meals taxes and more than $14,000 in state and federal taxes.

Its assets consist of about $44,000 in restaurant equipment. 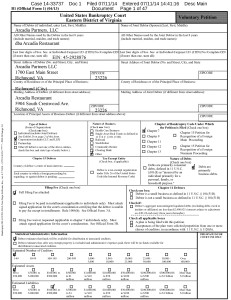 John Van Peppen opened Arcadia at the corner of 17th and East Main streets in late 2011. The space was previously home to Café Gutenberg.

Van Peppen was previously in management at Fleming’s, a steakhouse chain with a location in Stony Point Fashion Park.

A message left for Van Peppen was not returned.

Richmond attorney Douglas Scott is representing the business in its bankruptcy case. He did not return a call and email seeking comment.

The Chapter 7 process allows a business to liquidate its assets to be used toward paying off creditors. Typically in Chapter 7 cases, a trustee is appointed to organize the bankruptcy estate.

2113 Bistro closed in early June and a sign posted on its door last week by its landlord states that the restaurant’s equipment and other contents will be auctioned off due the business defaulting on its lease.

The sign was posted on the door at 2113 E. Main St. by Jon Ondrak, a representative for landlord Haxall View LLC. It was addressed to Jesse LaVancher, manager of the restaurant.

Yes, in a market which is over-saturated with restaurants, Richmond could sure use another Main Street Grill.

Karl, I can’t tell if you are being snarky or if you are agreeing with me, but my point is that Main Street Grill was more just a restaurant. It was a Shockoe Bottom gathering place for many Richmonders who did not comfortable elsewhere.

Why hasn’t someone revived Cafe Gutenberg or a similar idea here? It was a success, served some of the best coffee in Richmond, and it’s menu was delicious without being pretentious or over-priced.

Richmond has enough high-end eateries. We need more middle of the road places that are casual and comfortable, especially for vegetarians.