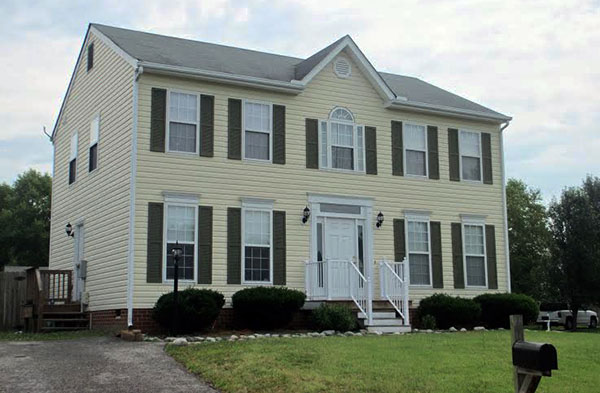 The home at 10000 Shiflett Court in the Lee’s Crossing community in Glen Allen could be put to auction on Aug. 1. Photos by Brandy Brubaker.

A local homebuilder stands to lose 32 residential lots spread across nine area subdivisions to foreclosure in the coming weeks.

Jonathan Hauser, an attorney with Troutman Sanders in Virginia Beach, said his client Union First Market Bank is foreclosing on the properties that are owned by local builder Hallmark Home Builders Inc.

The parcels include some vacant lots and some lots with houses that Hallmark owns in Henrico, Hanover, King William, New Kent, and Louisa counties.

Hallmark defaulted on a loan with Union, and the bank has demanded payment of the entire loan in full – approximately $4 million – Hauser said. Demanding the balance of a loan often occurs with large commercial loan defaults.

Auctions are set for July 31 and Aug. 1 if Hallmark can’t repay the full debt, Hauser said.

The telephone number listed for Hallmark on its website is no longer accurate. Attempts to track down a representative of the company were unsuccessful.

Hauser said he did not know the circumstances that led to the foreclosure in Hallmark’s case. But he noted that cases of homebuilders losing properties to foreclosure are much less frequent than they were several years ago. 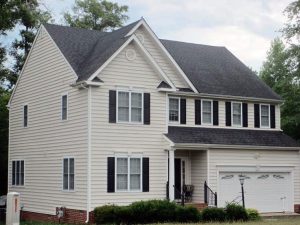 8300 Staples Trace Road in the Staples Mill Trace subdivision could also be auctioned.

“We’ve had two or three years of really, really low interest rates,” he said. “At this point in the business cycle, this is unusual.”

Large-scale lot foreclosures have died down in recent years. One of the few to take place this year was when part of a Powhatan subdivision – owned by a developer unrelated to Hallmark – went back to the bank at an auction in April.

In Henrico County, the Hallmark properties headed for auction include seven vacant lots and seven lots with houses in the Staples Mill Trace, Hunton Station, Mountain Laurel Townhouses, and Lee’s Crossing subdivisions. The auction for those lots is scheduled for 1 p.m. on Aug. 1.

Three lots with houses in Elwin Place, The Hollows and Glen Harbor subdivisions in Hanover County are scheduled for auction at 11:30 a.m. on Aug. 1.

Two lots with houses and 10 vacant lots in the Central Crossing subdivision in King William County are scheduled for auction at 1 p.m. July 31.

In New Kent County, two vacant lots in the Brickshire subdivision are scheduled for auction at 11 a.m. July 31.

A vacant lot in the Castle Park subdivision in Louisa County is scheduled for auction at 10 a.m. Aug. 1.

The auctions will be held on the steps of each county’s respective courthouses.