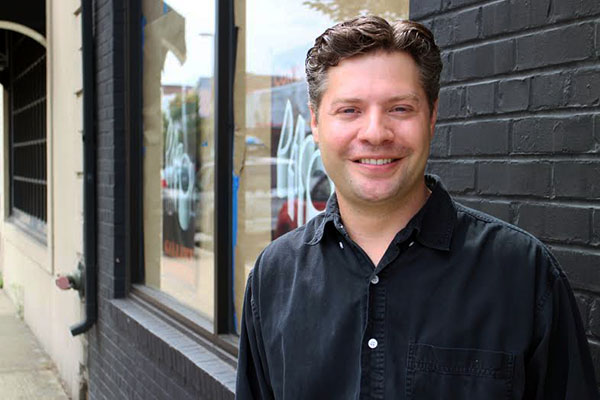 Aaron Mott was on a coffee break in Carytown when he decided to become one of the shopping district’s newest retail tenants.

Mott plans to open Deco Gallery and Coffee, a cafe and art gallery, at 3027 W. Cary St. in September.

He found the 2,300-square-foot space while working on a video shoot for a production company at the Byrd Theatre.

“On one of the breaks from filming, I walked down Cary Street and I saw the for-lease sign,” Mott said. “It was just a coincidence. I was just on a coffee break.”

He got in touch with Robert Hines, who owns the storefront that what was formerly Thomas-Hines antiques store, and now has a three-year lease on the space.

“Our hook is that we have both the art and the coffee,” Mott said.

Art sales can be fickle – particularly in the winter – but Mott said there is always demand for food. He plans to sell Turkish and regular coffee, along with baked goods from Williamsburg-based Kabbie’s Kake Studio.

“Art sales are kind of up and down,” Mott said. “It’s nice to have something consistent.” 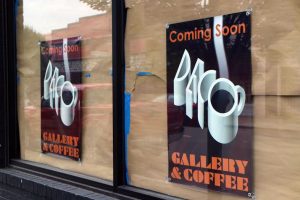 For Mott, a former Virginia Beach Geico employee, Deco is a return to his passion.

He studied studio art and started a student gallery at the University of Buffalo. After he graduated in 2005, the university absorbed the gallery, and Mott took a job with financial giant HSBC. Today, Mott said he hopes to parlay the contacts made in Buffalo into a viable arts space.

“Some of the same (artists) I knew back then are more established now,” he said. “Give people five or six years, and now all of a sudden they’re a big deal.”

Mott, 39, said he will do shows for these more established artists in his Deco space, but also plans to draw from the talent roaming the Virginia Commonwealth University campus.

Mott said a Williamsburg gallery owner told him that flowers and landscapes sell. But he wants to give emerging artists a chance to show their work at Deco, too.

Pieces at Deco will range in price from hundreds to thousands of dollars, depending on the standing of the artist. Mott also plans to sell prints and do online sales.

Mott is financing the venture with personal savings and family help. His rent is $18 per square foot. Renovations to the shop include a new floor, but Mott wouldn’t say how much he will spend on the changes.

“There are a lot of costs associated with interior design,” he said.

The gallery will sell pieces on consignment and will take 20 to 30 percent of each sale, depending on the artist.

Mott said Deco almost never made it to Richmond. Mott left Geico in 2013 and bought a house in Williamsburg, where he began laying the groundwork for a shop there.

“I was thinking of opening in Williamsburg originally, but Richmond is the right place to do this,” he said. “It has a nice bohemian feel.”

Aaron, congratulations! I’ll make sure to visit when you open. You should visit Crossroads Art Center (Staples Mill and Broad St.). Their business model seems to be working; they have been open now for several years and have been expanding. Bonne chance!

Thank you! To Michael Thompson for the article, and to Mike McDermott for the comment. I’ll make sure to check that out!

Congratulations, Aaron! Wishing you much success!

Thank you Ellen, and to everybody who commented on the article on Facebook and Twitter, for your good wishes. I appreciate it very much!

So what about the restaurant that’s been in Richmond for years already using the name Deco?

Thank you for your comment, James. Although both refer to that particular style, the type of venue is different, and are located far enough away from each other to avoid any confusion. The main focus of my establishment is the art, as opposed to a full-service restaurant.

I disagree. And not for the sake of disagreeing because I love your idea and location. But Deco is not only VERY close, it’s also a foodservice business just like you. The logo is even VERY similar. While I understand the differences, I would be throwing a fit if I owned Deco. It’s a new and desirable idea, with an unfortunately already taken name.

The existing Deco restaurant is also located in the Museum District, approximately 0.9 mile away from 3027 W. Cary St. You should also take into consideration the confusion on the web. When prospective customers are looking for your establishment and type in, say “deco richmond,” the existing restaurant could cost you business and vice versa.

However, it sounds like a lovely concept and I wish you best of luck.