BizSense Newsbites is a new monthly roundup of news on awards, grants and other announcements from local businesses and nonprofits. There’s a lot going on around town that doesn’t make it into the news each day. This new section will highlight announcements that are brief and valuable to BizSense readers.

Baskervill Principal Burt Pinnock has been appointed to the Commonwealth of Virginia’s Art and Architectural Review Board.

McGeorge Toyota of Richmond has received Toyota Motor Corp.’s President’s Award for the 18th year in a row for maintaining the highest standards in customer satisfaction.

Kristin White, a senior accountant at Wells, Coleman & Co. in Richmond, was named to the Virginia Society of Certified Public Accountants’ Top 5 Under 35 list. She has a bachelor’s degree from Radford University and a master’s from the College of William and Mary. 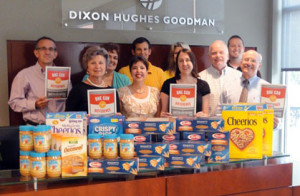 Signature, a Virginia-based family wealth advisor, was ranked 11th on CNBC’s 2014 Top 100 Fee-Only Wealth Management list. The inaugural list compiles the top wealth advisory firms across the nation based on assets under management, growth assets, years in business and other elements. Signature, founded in 1994, has 38 employees in Richmond, Charlottesville and Hampton Roads.

Dixon Hughes Goodman LLP, a full-service CPA and advisory firm, donated 431,475 pounds of food to the communities it serves in 11 states. The Richmond and Chester offices donated more than 8,400 cans of food to FeedMore and 2,600 cans to Chesterfield Food Bank.

J. Cory Hoffer, president of Richmond-based Hermitage Wealth Management, was selected for a Young Advisors Team award by Richmond’s chapter of the National Association of Insurance and Financial Professionals. The award recognizes advisors under 40 who exceed standards of excellence.

Midlothian resident Vonne Martin’s wildlife photography has been made into a book called “Southern Africa Safari: Beyond the Concrete Jungle.” Martin spent a month in Africa photographing wildlife. The book can be purchased at vonnesventures.com. 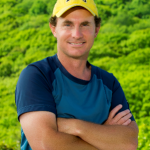 VCU Assistant Professor Dr. Jason Reed was awarded a $2 million grant with a collaborator at the University of California – Los Angeles, for cancer research. Reed works at the Department of Physics and Massey Cancer Center.

VCU Psychology Professor Everett Worthington received a $940,000 grant to promote the study of forgiveness in West and South Africa.

Timmons Group has been named to CE News’ “Best Firm to Work For” list for the civil engineering industry. Timmons Group was founded in 1953 and has more than a dozen offices in Virginia and North Carolina. 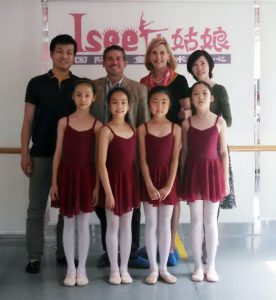 Richmond Ballet was invited to participate in the U.S. Department of State’s 2014 Cultural Pillar Delegation for the U.S.-China Consultation on People-to-People Exchange in Beijing. U.S. Secretary of State John Kerry and Chinese Vice Premier Liu Yangdong joined participants for the forum, which promoted cultural understanding between the two countries. Richmond Ballet Artistic Director Stoner Winslett and Managing Director Brett Bonda attended on behalf of the ballet. The ballet will travel to China next year to perform.

YMCA of Greater Richmond received a $100,000 grant from the Richard S. Reynolds Foundation for its year-round care program for students at Woodville Elementary School.

Luck Companies Foundation gave a $5,000 grant to the Capital Region Land Conservancy for its Our Land and Water program that aims to improve and protect water quality in Richmond.

The Greater Richmond Chamber announced the finalists for its 2014 Impact Awards, which recognizes companies that make an impact on their industries, communities and employees. In the small business category, the finalists are Free Agents Marketing, TrueTimber Tree Service, and Unboxed Technology. Baskervill, Dominion Due Diligence Group, and Sweet Frog are finalists in the large business category. A winner will be chosen from each category and will be announced at the Impact Awards Celebration Dinner on Nov. 12. 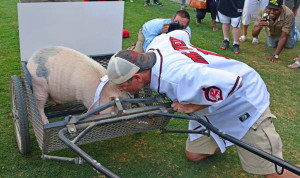 The Virginia Association of Museums launched its new website and interactive community, vamuseums.org, and a new logo. Also, all full-time students may now join VAM for free.

Richmond Flying Squirrels Charities raised nearly $40,000 for local youth athletics with its inaugural Smooch-A-Pig fundraiser. Local business leaders and celebrities raised money for the honor to smooch Parker the Rally Pig at the Squirrels game on July 17. Dan Schmitt from RMC Events raised the most money and got to kiss Parker.

Re/Max Commonwealth was ranked among the 50 most productive real estate brokerages in the United States based on home sales data in 2014 REAL Trends 500 survey.

The Leukemia & Lymphoma Society Virginia Chapter has named local Realtor John Daylor its man of the year. Daylor raised $95,000 for the chapter. 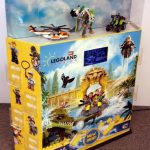 Keith Fabry is building 100 displays for LEGOLAND parks and hotels.

Keith Fabry secured a contract with Legoland to build 100 custom cabinet displays for hotel and resort lobbies in Florida. The displays are custom fabricated with an LCD video player, brochure holders and a clear polycarbonate topper for merchandise viewing.

Dominion Digital is now Single Stone. The company, which helps clients capitalize on e-commerce innovations, was founded in Richmond in 1997 and has a second office in Charlottesville.

Hardywood Park Craft Brewery has launched The Urbanite Market which will be held every Sunday in July from noon to 3 p.m. The market will offer local food, live cooking demonstrations, vendors, 20 percent off growler fills and more.