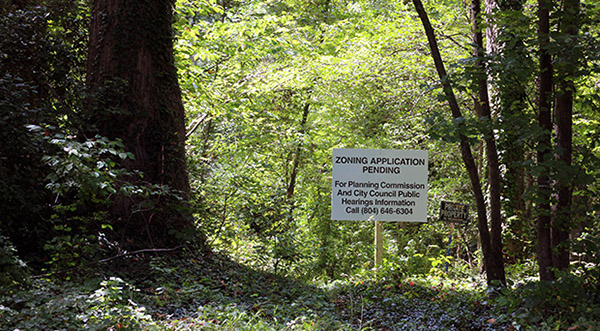 A 55-acre property could be developed into apartments and single-family homes pending a City Council decision. Photo by Burl Rolett.

A new Southside development that will build nearly 400 new residences in the city got the go-ahead from the Richmond Planning Commission on Tuesday.

Edge Development Partners received approval for the rezoning of 55 acres near Jahnke and German School roads. The company, which is under contract to purchase the land, is proposing a 252-unit apartment complex on the property’s southern edge and 125 detached single-family homes on its northern side.

Edge Development is headed by Jesse Clark, along with local developers Nolan Felts and Craig Kilpatrick.

Clark said Tuesday the company is betting the neighborhood will appeal to young professionals working at the nearby hospital and Boulders Office Park and empty nesters looking to downsize or get out of home ownership all together.

“It’s extremely close to work for people, and you can shoot right into downtown, the Fan, Carytown, anywhere you’d like to go,” Clark said. “It’s closer in than people are in the West End.”

The project’s apartment piece would have 13 buildings sitting on 23 acres between Lucille Murray Brown Middle School and the Crossings at Bramblewood Apartments. 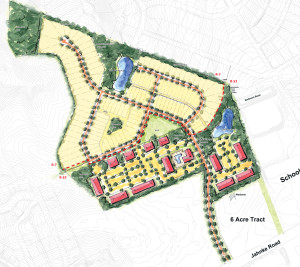 See the plans for the property (PDF).

Virginia Beach-based developer The Breeden Co. is under contract to buy the apartment land from Edge Development Partners and will also be in charge of apartment development. That deal is expected to close in mid-2015, Kilpatrick said.

The single-family development would cover about 32 acres stretching northwest toward the Powhite Parkway. The 125 homes will range from about 1,600 to 2,500 square feet with prices running from the low $200,000s to around $400,000.

Kilpatrick said several homebuilders are interested in the neighborhood, but Edge Development Partners hasn’t yet contracted any builders.

To allay some concerns brought up by the Planning Commission staff, the Edge Development Partners also provided a guarantee that it would begin developing the first phase of the single-family section simultaneous to the development at the apartment complex.

Edge Development Partners did not have an estimate for what the development would cost to build but said it could begin work as soon as the land had been rezoned and the building permits issued.

The project must still receive approval from Richmond City Council. Its next meeting is Sept. 8.

A pair of other projects got positive recommendations from the planning commission Tuesday. A rezoning request was approved for VCU’s planned Virginia Treatment Center for Children near the Diamond. Developer Louis Salomonsky also got a recommendation on a special use permit for a planned conversion of a building at 613 N. Lombardy St. into 13 apartments.

Also at Tuesday’s meeting, a request for a special use permit to allow a massive brewery on Williamsburg Road was continued. An application to allow a similar brewery at Thalhimer Realty Partners’ Reynolds South property is still pending and was not considered at Tuesday’s meeting. Both sites are vying to attract California’s Stone Brewing Co.