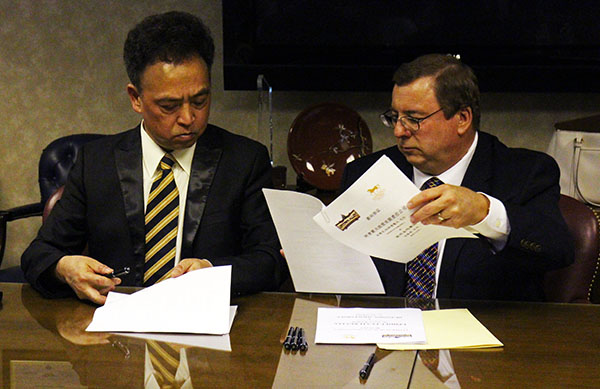 Chesterfield County got its first glimpse of plans for a massive water park, hotel and conference center development on Wednesday morning.

Local businessman Steve Uphoff and a Chinese investment group ceremoniously inked a deal yesterday at the Chesterfield County Economic Development Department. Their partnership will start with the construction of a $160 million indoor water park, a 400-room hotel and a convention center on 26 acres on Brad McNeer Parkway in Midlothian.

The project will sit next to Uphoff’s Uptown Alley bowling complex. The development is in the conceptual phase and will need to be approved by Chesterfield County, county officials said. The county has dubbed the plan “Project Big Splash.”

On hand at Wednesday’s event was Xing Xing Wu, top executive of Quanzhou, China-based Jinma Group. The company is helping Uphoff finance an ambitious plan to expand his Uptown Alley brand and the water park concept around the world.

“They have many more assets than we’ve ever had, and their assets are unencumbered – they’re in cash,” Uphoff said of Jinma Group.

Uphoff and Jinma Group plan to build water parks in Phoenix and China and five Uptown Alleys each in China and the U.S. Uphoff said he’s considering Manassas, Virginia Beach and north of Baltimore for future Uptown Alley locations. 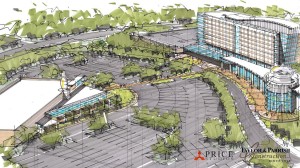 Uphoff, founder of the Uppy’s convenience store chain, estimated that the complete slate of projects both here, in Phoenix and overseas would cost between $3 billion and $4 billion.

A representative of Jinma Group, speaking through a translator, said the company was founded in 1985 and has done a multitude of real estate investment deals, including the construction of four-star hotels in China.

Uphoff said he had previously worked with other Chinese investors through Uppy’s and was introduced to the Jinma Group through the Chinese Chamber of Commerce in Washington, D.C.

Through the partnership, Uphoff gets the Chinese group’s financial resources to fuel the growth of his Uphoff Ventures. Uphoff lends his experience in the entertainment industry to China, a country he said doesn’t have enough recreation opportunities for its 1.4 billion people.

Price Studios in Richmond did preliminary renderings of the site. Taylor & Parrish Construction, the local company that built the Midlothian Uptown Alley, will serve as general contractor.