PFG is headquartered in the West Creek office park in Goochland County. Photo by Evelyn Rupert.

One of Richmond’s biggest companies wants to get back on the stock market.

Performance Food Group, the Goochland-based food distribution giant, made a preliminary filing on Tuesday for an IPO that could raise hundreds of millions in capital and take the company public once again.

Filed with the Securities and Exchange Commission, the document is the earliest in the process of going public. It gives little detail about the size of the potential IPO, other than listing an initial target of raising $100 million. That number will likely change as the company files more specific details.

Headquartered at 12500 West Creek Parkway, PFG is majority owned by the Blackstone Group and Wellspring Capital Management. The two private equity firms took PFG private in 2008. Prior to that, the company had been a publicly traded Fortune 500 firm with roots tracing back to the late 19th-century Richmond.

The company commented on the filing only through a prepared statement: “We’re excited about this latest development and look forward to the next steps,” it said.

PFG spokesman Joe Vagi said the company declined to speak further on the filing, as is typical with IPOs.

Given its size – its revenue rivals Richmond’s largest corporations – PFG operates somewhat under the radar in the area because of its privately held status. 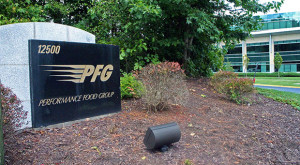 PFG has been privately held for six years.

But the IPO filing does give a glimpse at PFG’s financial statements and shows that its revenue and sales figures put it in the company of Altria, Dominion Resources and CarMax, the area’s richest firms.

PFG in its filing says it is the third-largest player in the U.S. food service distribution industry. It pegs that industry at a value of $231 billion and says it believes it controls about a 5.8 percent share of that market.

It generated $13.7 billion in sales in its most recent fiscal year. By comparison, Altria, Dominion and CarMax reported revenue last year of $24.4 billion, $13.1 billion and $12.5 billion respectively.

PFG makes its fortune selling food products and other services across the country.

In addition to distributing food, the company provides services to restaurants including product selection, menu development and strategy.

The company has approximately 11,000 employees, including 220 full-time staffers at its West Creek headquarters.

A 334,000-square-foot warehouse and distribution center just off Staples Mill Road serves as the home to its Performance food service arm. That facility has 287 employees.

The company’s lineage goes back through several corporations, one of the first of which was the James H. Capers Brokers and Manufacturers Co. in Richmond in the late 1800s.

Over time it became Taylor & Sledd and went public as Performance Food Group in 1993.

It eventually came to be owned by the Blackstone Group and Wellspring Capital Management. They took it private and combined it with food service distributor Vistar Corp.

Wow, never new that Blackstone was a majority owner.