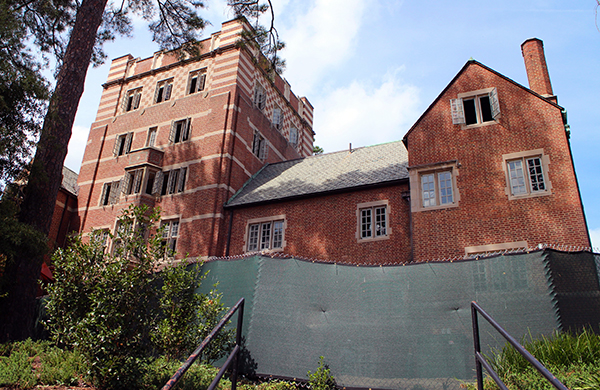 University of Richmond has started renovations of two of its dorm buildings, including Thomas Hall. Photos by Brandy Brubaker.

As one construction project wraps up at a local university, another begins.

The University of Richmond recently opened the doors to two new dorms – Gateway Village Apartments and Westhampton Hall – just in time for the fall semester after $34 million in renovations.

Work is now underway to renovate two existing dormitories – Jeter Hall and Thomas Hall, two of the original buildings of what was once Richmond College. The renovations will cost about $13.5 million, said UR spokesperson Sunni Brown.

“These projects are part of a long-term, multi-million dollar plan to renovate student housing on campus,” Brown said in an email.

Jeter and Thomas halls, built around 1914, are closed this year as they are renovated into suite-style accommodations that can house about 170 students, she said. Work is scheduled to be completed in time for the fall 2015 semester.

BCWH Architects and Trent Construction are working the renovations at Jeter Hall and nbj Architecture and RVA Construction have paired up on the Thomas Hall project, Brown said. 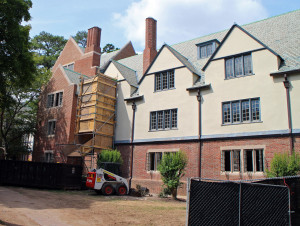 University of Richmond’s Jeter Hall is being converted into suite-style student dorms.

The addition of Westhampton Hall and Gateway Village Apartments gave the university the extra living space it needed to accommodate students during and after renovations.

Westhampton Hall has 110 suite-style rooms, a community lounge, a multi-purpose room and study space, according to the university.

Gateway Village has 44 apartments spread out between four buildings connected by a courtyard. Community spaces include a large living room, patio and three study rooms.

Undergraduate enrollment at the university is about 3,000 students, Brown said. Tuition is $46,680 a year.