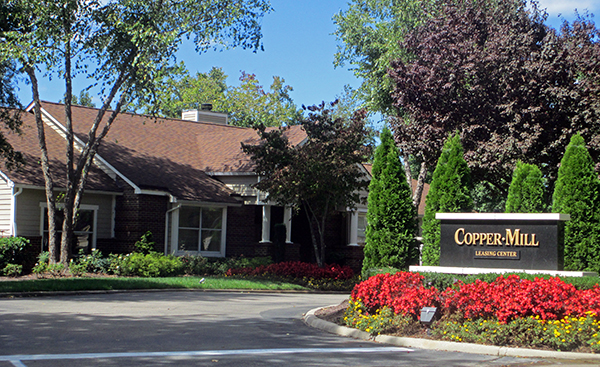 The Copper Mill apartment development in Henrico County has been put on the market. Photos by Burl Rolett.

A big suburban apartment complex in Henrico County is up for grabs.

Copper Mill, a 192-unit property that stretches south from West Broad Street between Tuckernuck Drive and Pemberton Road, has been put on the market by its West Coast owner.

The 13.35-acre property is owned by California-based JRK Properties. Wink Ewing, a broker with ARA Mid-Atlantic who is handling the sale for the owner, said there is no announced offering price, but he is expecting it to sell for more than $28 million.

Ewing said Copper Mill is drawing some interest from both national and local investors.

“Richmond is a pretty low-volume market in terms of deals of this quality and size,” said Ewing. “People tend to want to invest and own properties here, but there aren’t that many deals available.” 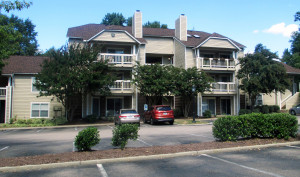 Most Copper Mill apartments rent for a little more than $1,000 a month.

JRK Properties representatives did not return phone calls seeking comment on the sale. The company also owns the Ivy Walk I and Ivy Walk II apartment complexes in Chesterfield.

Copper Mill was built in 1986, according to county records, and is in the middle of a renovation. About 60 percent of the apartments have been redone in the last eight years, Ewing said, and the newer apartments are drawing about $75 more in monthly rent than the older units.

The entire property is about 95 percent occupied. Apartments average about 825 square feet and are renting at an average rate of about $1,032 per month, or $1.25 per square foot.

A buyer would assume financing for about $21 million of the final selling price, the bulk of which comes from an existing $18 million, 10-year mortgage on the property.

Ewing is hoping to get finalized offers in the middle of October with the goal of closing a deal towards the end of the year.

If the property does trade near the $28 million mark, it would be the largest Henrico County real estate transaction of the year. The three-building East Shore Office parks was the biggest sale to-date at $26.7 million. Laurel Springs near Staples Mill Marketplace, which sold in January for $14.5 million, is the county’s biggest 2014 multifamily deal.