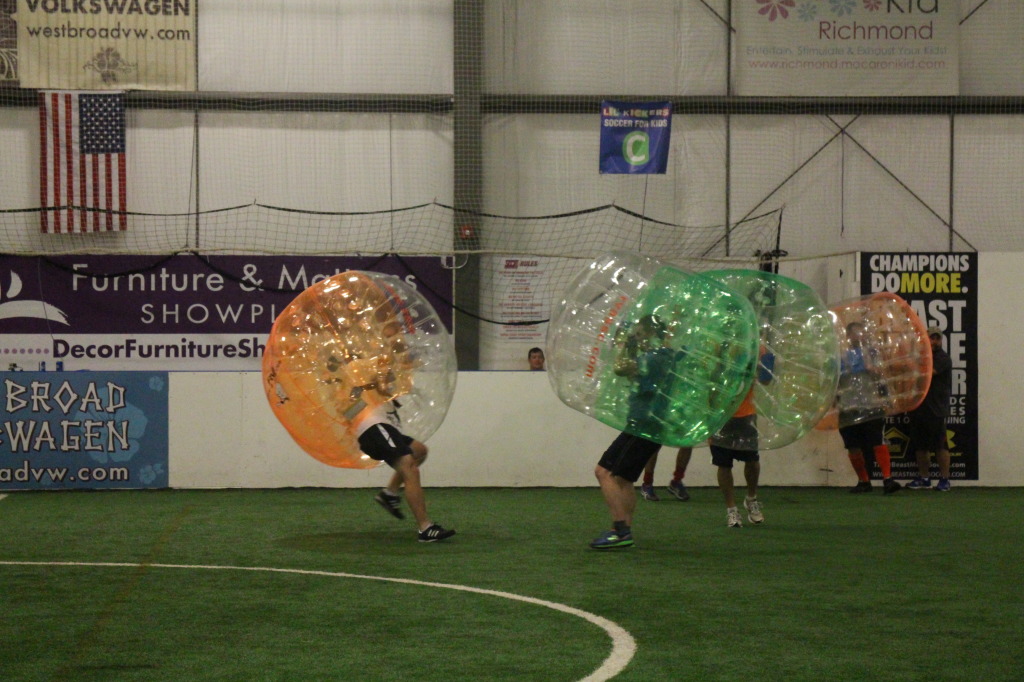 RVA Sports and Social Club is jumping in as a newcomer in the well-established Richmond market of pairing sports with bar hopping.

And to secure its territory among the competition, RVASSC founder Mike Damon and his two partners are betting on the unusual sport of bubble soccer.

Bubble soccer players wear large, inflatable bubbles that cover the top half of their bodies, leaving their legs free to kick the ball.

The protective bubble allows for players to unleash hockey-like body checks, and the cushion leaves players bouncing and rolling in what amounts to a non-stop sports blooper reel.

“We saw this on YouTube a while back, and we wanted to try to bring it to the U.S.,” said Damon, who also works full-time in medical sales.

But starting up took longer than expected.

“It took us six months to get insured,” he said. “No one knew how to insure it or what the costs should be.”

They’ve since seen a few tournaments or single-day events pop up around the country, and a few leagues have begun to organize nationally.

“We can say confidently we will be one of the first leagues,” Damon said. 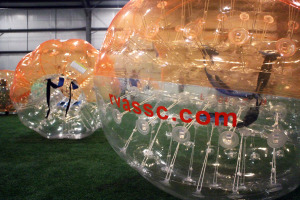 Much of RVASSC’s startup costs come from the bubble soccer equipment.

As it works to form its league, RVASSC has held showcases around town to introduce people to the quirky sport. It held an event Friday at SCOR, an indoor sports facility near the Diamond.

“A lot of people have questions about the sport,” Damon said. “They want to see if it’s a good fit for them.”

Damon said the company’s goal is to branch out to other sports, including flag football, dodgeball and others. But bubble soccer is what the owners hope will help their club get attention.

“We’re going to try to leverage bubble soccer and its uniqueness as much as we can,” Damon said. “That’s our cool sport that will help get the word out.”

They’ll need something different to take on the other players in the market.

A few already established leagues with similar business models have operated successfully in Richmond for more than a decade.

There’s the similarly named River City Sports and Social Club and WAKA (the World Adult Kickball Association), which have both operated here for 11 years. There’s also Be Social Richmond, which runs cornhole and floorball leagues.

The models used by each aren’t too far off from one another. Adults sign up for leagues that are sponsored by local bars. After the games, players go socialize at the sponsor bars. The league benefits from the sponsorship money and the camaraderie among its registrants, and the bars get the promise of crowds of players running up tabs.

Damon said his league is still working to decide on a sponsor bar but that it has been speaking with Gus’ Bar and Grill, Social52 in the Fan and Home Team Grill.

In addition to bubble soccer, Damon said his league will keep a focus on the social aspect and may look to organize corporate events where local companies can bring their staff out for a round of bubble soccer.

Startup costs so far have been in the tens of thousands, Damon said. One of the biggest upfront costs was the 28 bubbles they ordered at around $400 a piece.

Damon said their Richmond bubble soccer leagues are forming now for the fall season. They’ll look to run games at SCOR and the Richmond Volleyball Club, both indoor facilities.

Registrants can sign up as a team or individually. Fees are currently set at $69 per player, but Damon said the goal is for that price to decrease over time as volume might decrease the league’s insurance premiums.

For its first season, Damon is shooting for 20 teams a night or roughly 440 players.

“We’ve been growing every year,” he said. “It’s all about the social aspect and not just the sports part of it.”

Damon said he realizes there are similarities in the business models, as well as the name of his and Small’s league.

Damon said he started RVASSC with Jamie Conway and another partner after playing in River City Sports and Social Club.

“I’ve always been one of those guys that likes to play every rec sport,” he said. “I’ve never been an all-star, but I’ve always liked getting involved. I saw a lot of opportunities to do it better.”