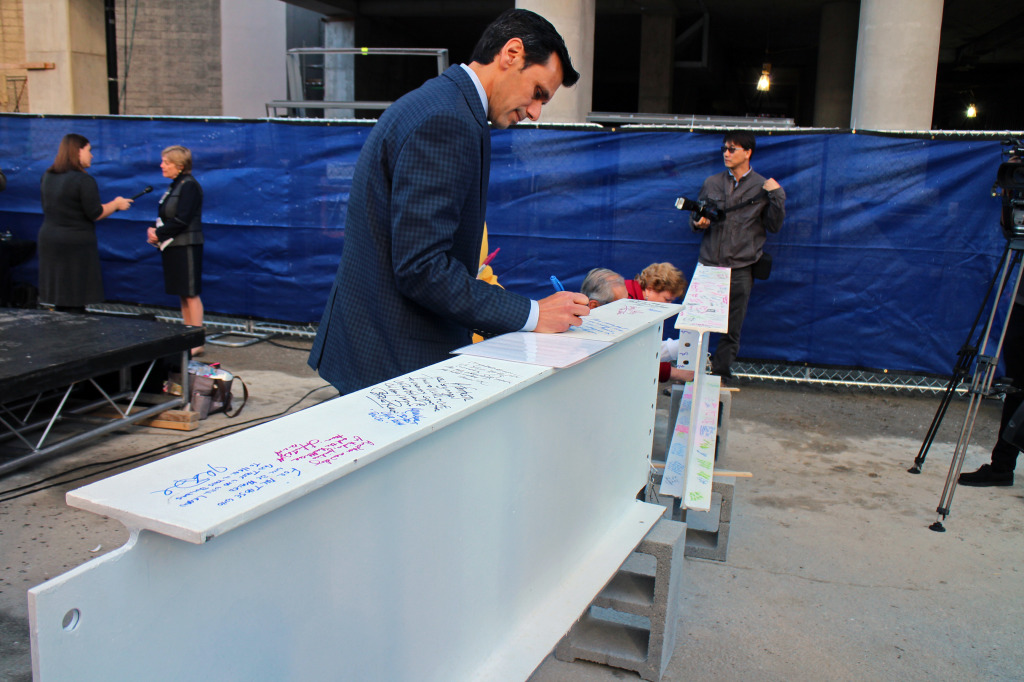 VCU President Michael Rao signs a beam of the upcoming Children’s Pavilion at a Monday event. Photos by Kaite Demeria.

The Children’s Hospital of Richmond at Virginia Commonwealth University fitted the forthcoming 15-story Children’s Pavilion building at 1000 E. Broad St. with its highest beam Monday. It’s a step in the construction process often called “topping out.”

Construction on the $168 million, 640,000-square-foot pediatric medical facility began in September 2012. It will house 72 exam rooms separated into six pods, as well as operating rooms, diagnostic testing areas and rooms for lab services.

And the structure delves 55 feet underground in order to house more than 600 parking spots. 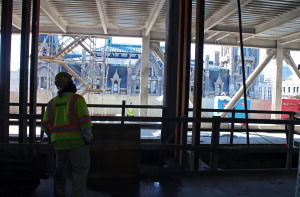 The new Children’s Pavilion, right next to the old city hall, is expected to be finished in about two years.

The project was originally set for completion in 2015, but that date has been pushed back to early 2016. Bryant Wilson of JLL, which manages the project, said a wet summer in 2013 caused the setback.

Skanska is the general contractor assigned to the project, and HKS is the architect.

The current Children’s Pavilion, located a block away from the new structure, will eventually be razed as the Children’s Hospital project progresses, said Dr. Bill Moskowitz, VCU’s Vice Chair of Pediatrics. It is not yet clear when that will take place.

Moskowitz said the staff at the current Children’s Pavilion will begin leaving the building in November 2015 to prepare to start work out of the new facility in January 2016.

The new structure will cater to the needs of younger patients and their families, Wilson said. Not only will it reduce the stress of finding a downtown parking space, he said, but it will create open, well-lit areas to ease the stress of doctor visits, including an outdoor seating area on the second floor.

“It’s a place for them to go if they’ve been inside all day,” Wilson said. “That way they don’t feel they’re always stuck in a building.”