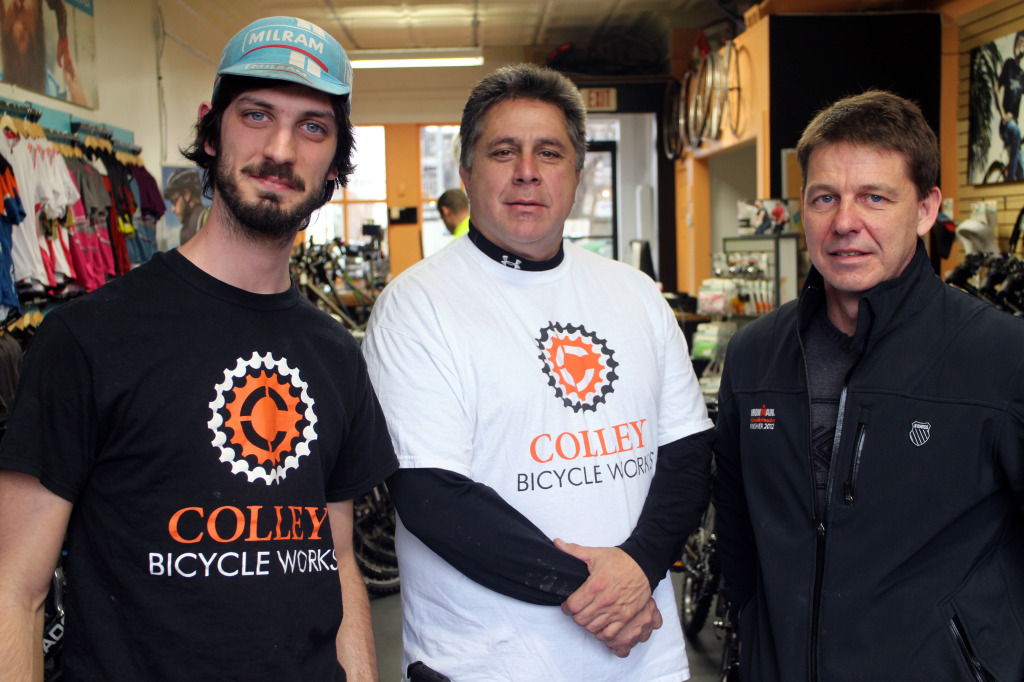 From left: Robbie Wood, Robert Castillo and Casey Murray, along with Joe Marino (not pictured), have launched a new bike brand in Carytown. Photos by Michael Thompson.

The namesake brothers of a well-known bike shop are shifting gears, and the changes have launched a new brand in the competitive Carytown bike scene.

A new group of owners has taken over the Conte’s Bike Shop at 3105 W. Cary St. and rebranded the store as Colley Bicycle Works.

The shop’s new owners are Robert Castillo, Casey Murray, Joe Marino and Robbie Wood. The shop was originally opened as Conte’s in 2012 by Castillo and Charles Conte.

The change breaks the shop away from the 57-year-old Conte’s brand. But Castillo said he’s confident in bringing a new concept to a stretch of Cary Street that has four bike shops within a few doors of each other.

“We can stand on our own,” Castillo said. “Conte’s has a great name, but so does Colley’s.”

Castillo said the name Colley comes from an old bike shop in Norfolk. He said he wants to make the shop more community-oriented with community rides and more competitive prices. 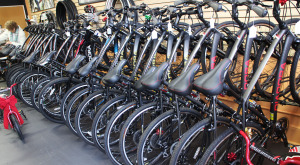 Colley’s is one of several bike shops in a small stretch of Cary Street.

“We want to become that kind of shop that caters to public,” Castillo said.

Castillo said Marino was the regional manager for some of Richmond’s Gold’s Gyms, Murray has a background in retail and sales, and Wood has been a bike mechanic for five years, most recently at the former Carytown Conte’s.

And the ongoing changes at Conte’s extend beyond the rebrand in Carytown.

In addition to handing over the reins of the Cary Street shop, Charles Conte sold the two other Richmond Conte’s Bike Shops at 4300 Pouncey Tract Road in Short Pump and 1212 Alverser Drive in Midlothian to his brother David Conte and Wayne Souza. Charles Conte said both he and his brother had expansion plans for their respective stores and that merging their operations was best for business.

“It’s better to row in the same boat instead of two separate boats,” Charles Conte said. “It enables us to grow faster. It gives me the ability to really focus on a couple of things instead of 50 things.”

Charles Conte Sr. founded the brand in 1957 in Newport News. The younger Charles Conte had owned the three Richmond stores for many years but is now the company’s national sales manager. He no longer has an ownership stake in the company, David Conte said.

In addition to the Richmond stores he took over between September and November, David Conte also owns three other Conte’s shops in Williamsburg, Chesapeake and Virginia Beach. He said making sure all the Conte’s stores were under the same ownership was important to him as he expands the brand.

David Conte would not disclose the terms of the sales of the Richmond stores.

He did say that more Conte’s shops are in the works.

“We have plans to open in Northern Virginia,” David Conte said. “We’ve got signed leases to add locations in Newport News and Falls Church.”