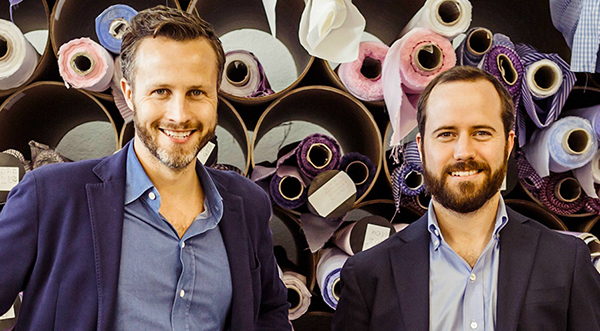 What a difference five years makes.

The company sold 65,000 of its high-end men’s dress shirts this year. In the company’s first year, the business school chums sold 3,000 shirts.

Trible and Watson also used their fifth year at Ledbury to further push the business beyond online shirt retail.

Those 65,000 shirts sold in 2014 are in addition to the blazers, sweaters and accessories that have since been added to the Ledbury inventory. The brand began expanding its reach into traditional retail avenues in stores like Nordstrom.

And with more money coming in, the company has started sharing the wealth. Ledbury brought in $5 million through a capital raise this year and gave away $25,000 as part of a startup competition that will be held again in 2015.

As Trible put it recently, “We want to be a little bit more than just a clothing company. To have sold a bunch of shirts would have been great, but it would be better if we had grown something a little more significant.”

BizSense sat down with Trible, 34, and Watson, 35, to hear their thoughts on growing a business, crafting a brand and rebounding from mistakes they made along the way.

Richmond BizSense: How many Ledbury shirts do you have at home?

Trible: I probably have 70, and I also did a big spring cleaning. You’ve got a few shirts when you’re in the business. We got a stocked closet.

RBS: When you’re not wearing Ledbury, what are you wearing?

PT: I don’t wear anything but Ledbury, in all honesty. It’s to my detriment in the summertime. This is why we’re getting into making polos. I’ve had five Richmond summers when long sleeve shirts have basically been the only thing I’ve worn. Besides working out, it’s mostly all Ledbury for me.

PW: It’s the same way for me, except for the occasional running T-shirt.

RBS: What’s different about running Ledbury in 2014? How does it feel compared with 2009 and 2010 when Ledbury was more in the startup phase?

PW: The obvious difference is the number of folks (Ledbury has more than 30 employees) we’ve got working with us, which is great. It’s really motivating to have all these great talented people working with you day in and day out. It brings a different sense of purpose to what you’re doing. It’s certainly makes it that much more enjoyable.

RBS: You’ve mentioned in previous interviews that inventory to meet demand was one of the biggest challenges. Is that still the case as a 5-year-old company?

PT: We’ve gotten a lot better at meeting demand. I think that the first few years of our business we always didn’t have enough. Supply was kind of an issue to growth. We’ve hired some very smart people – somebody at MeadWestvaco does our supply chain, we’ve got great warehousing. We’ve gotten better at meeting demand, but managing all that is a lot more complex because now it’s not only shirts. We’ve got a million plus dollars’ worth of inventory – it’s blazers and jackets coming from different places, so it’s become more complex, but we’ve become better at managing it.

RBS: It seems like every time we report on you guys, it’s always great news. Could you say what worries you about the business?

PT: A couple things. You can’t continue to grow 100 percent forever. So what’s going to be that right medium? That really steady spot where you feel like you’ve got a great growth rate, where we’re making the money that we want to, we’re expanding in the right areas still aggressively, but you don’t need to grow 100 percent year after year.

Our biggest challenge right now is that we’re expanding into traditional retail. Our success has been in the e-commerce business where it’s been very new and approached very differently from traditional apparel.

RBS: Speaking of expanding into those other channels, I can now buy a Ledbury shirt on Nordstrom.com. You’ve said that one of the benefits of your business is that you guys cut out the middleman and didn’t have to do a big markup. Going with Nordstrom, is that going to have to change?

PT: Luckily, working with people like Nordstrom and Trunk Club, it’s big enough volume in the way that you’re purchasing base materials – things like fabrics, buttons and trimmings, where the economics still at the end of the day work for us. We would much rather deal directly with the customer. We get better margins and it’s a direct relationship. But what’s cool about the Nordstrom or Trunk Club relationship is they’re introducing that product to a whole new group of people that might not transact online with us.

RBS: Any other wholesalers you partner with?

PT: We’re looking to expand that next year. It’s not going to be 1,000 doors, but what we’re trying to do is pick 10 or so really good partners in the markets that we already know do really well for us to kind of continue to let people try stuff on and introduce the brand to new folks in sort of select cities around the country.

RBS: Ledbury has very intentional, carefully crafted branding. Does that come from you or do you have a team that does your branding?

PW: First and foremost it comes from us, more so Trible than myself just through our division of labor, but we also got a good group of talented folks that help us fine tune and hone that message.

RBS: What are you trying to evoke in the lifestyle you present with your online content?

PT: There’s always been an Anglo, sort of European, southern American thing going on, which is a bizarre story but the only way we could come up with that story is that it’s Paul and mine’s story. We’ve spent time in Europe, we’ve spent time in London and in the U.K. studying, we spend a lot of time on the Continent building relationships with factories and suppliers. But we’re from the Southeast down here where we grew up – Paul in New Orleans and me in Virginia. Our families are here and we still live a lifestyle where we’re going over there and working and finding fabrics and working with mills and then we’re coming back and throwing things like a quail hunt. We’re telling a Richmond story, so I think it’s a mix sort of those two worlds.

RBS: Who are the customers that have helped Ledbury grow, and who do you hope to attract?

PT: Our customers tend to be from the age of 27 to 67, but the core of our customers is like the thirties group of folks, and that’s because they are shopping online, they’re affluent and buying luxury products. But there seems to be – at least in the older demographic – an idea that we’re just kind of a slim-fit brand. There’s this perception that, “Oh, I can’t wear these.” But really, when we talk about fit, we just mean better-fitting shirt on both a bigger guy and a smaller guy.

We’re trying to figure out how to phrase that, because fit is so important to us. Fit doesn’t necessarily mean skinny, it means to have a more flattering look.

RBS: You raised $5 million in new capital this year. Does that add pressure to your routine to running the business?

PT: There’s a lot of pressure for this business to be successful, just personally and for the people that work with us and for our customers and vendors. I don’t think it adds too much pressure, I think it excites us more because it gives us the ability to go out and do things that we believe we can do. It doesn’t change the way that we feel about the business, but we know that we have a responsibility to do well. This gives us the means to actually go out and do it.

RBS: Were there any things you took a gamble on that didn’t pan out?

PT: We put two pockets on dress shirts by accident and that was like $25,000 worth of shirts – early on, that’s a big deal. We’ve done some promotions that we thought were going to totally change the trajectory of our business and were met with crickets. We’ve done some pop-up stores that have been wildly successful and we’ve done others where we’ve been pulling people in from the street. For us, it’s fail fast and getting back up and doing it again.

RBS: Could you say where you want Ledbury to be in five years? Do you still want to be in Shockoe Bottom?

PT: Richmond is home. We’ve kind of had fun being part of the Richmond downtown renaissance. We’re definitely going to stay in Richmond. In terms of company growth, we think we’ve got the opportunity to be one of the next real significant men’s wear brands in the country. And so we don’t want to sell the business in five years, we want to continue to grow this thing to the point where it’s double, triple, five times from where it is now.

RBS: Has anybody ever offered to buy Ledbury?

PT: No one has formally offered to buy the company, and we have no interest in selling the company right now. We’re about trying to grow something that’s unique and cool.

In other words, they very intentionally fail whenever possible to mention that the shirts are manufactured in Poland.

Their marketing story would be a much more compelling one if the shirts were made anywhere close to the places they constantly evoke in their “carefully crafted branding”.

Hi Archie, I head up social media and copywriting over at Ledbury. I’m sorry to hear that you feel like Ledbury intentionally excludes mentioning that our shirts are manufactured in Poland. We’re very proud of our relationship with the factory in Poland, and consider the team as colleagues, mentors, and friends. Since we do work with one of the best shirtmaking factories in the world, we intentionally do not mention the name of the factory due to hesitation for competitive reasons. We recently visited our factories in Italy and Poland, and created several videos highlighting our relationships with our production… Read more »

Mel, You talk a good game about transparency, but I notice on Ledbury’s website that nowehere on any individual shirt page does it say “Made in Poland”. If the shirt happens to be made of fabric from an Italian mill, that fact is front and center of course. The shirt pages don’t even say “Imported” – which is the usual dodge for etailers looking to hide the ball. If you are indeed proud of manufacturing in Poland, then say so in a manner that will be noticed by your customer before clicking add to cart. From your website’s FAQ question… Read more »

I have maybe 10-15 Ledbury shirts, made in various places. The one I am currently wearing says “Made in Turkey” on the tag. I’m not sure what your fascination with the Polish plant is, Archie.

Not fascinated by the Polish plant that for competitive reasons must remain nameless. I am ALWAYS concerned about where products are made – mostly out of a desire to avoid purchasing products made in China whenever possible. When I see a company that I think is not being forthcoming about it or whose marketing suggests one thing while actually doing another, I speak up about it. I give Ledbury credit for staying out of China.