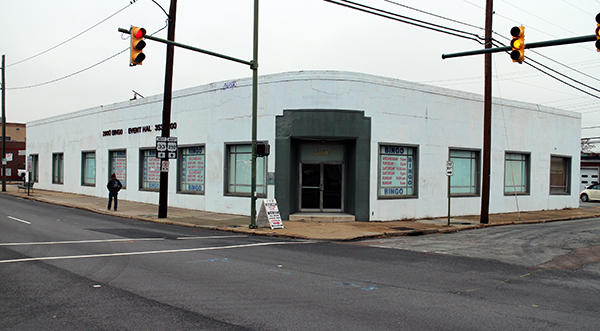 A school is considering redeveloping its bingo hall into a new retail space near Scott’s Addition. Photo by Michael Thompson.

The owner of potentially prime Scott’s Addition real estate has a plan to lure a fresh crop of retailers to the ever-developing neighborhood.

The property at 2900 W. Broad St. is being floated for redevelopment as the Shoppes at Scott’s Addition. The 8,250-square-foot building sits one block west of West Broad Street and North Boulevard and is owned by Yeshiva of Virginia, a West End Jewish high school for boys.

Yeshiva of Virginia President Stuart Cantor said the property, currently used by the school as a bingo hall, is in an ideal location given the development that’s been taking place in the surrounding area.

“The school thinks it would best to realize the value of the building rather than continue on as a bingo hall,” Cantor said.

The school has enlisted commercial real estate firm Colliers International and brokers Martin Blum and Loretta Cataldi to pitch the concept to businesses.

“We have been quietly marketing the property for sale for single-tenant retailer users as maybe a tear-down,” Blum said. “We have since decided we might just redevelop it ourselves.”

The idea for the development was spurred by the rise in apartments in Scott’s Addition, as well as an uptick in office space.

“Retail is kind of underserved for Scott’s Addition,” Blum said. “We just want to fit in with everything that’s going on there.”

Blum sees potential for the Yeshiva property to attract national retailers, those that would want the visibility afforded by a property that fronts a busy street. Those potential national tenants would complement the local businesses that have already set up deeper within Scott’s Addition, like a new Urban Farmhouse, breweries and more, he said.

“There is some retail along Summit Avenue, but it’s more of a local style,” Blum said. “The national tenants and regional tenants are not going to look at interior streets.”

Blum said the best-case scenario would be to lease the space to a national brand, but he isn’t ruling out locally based tenants.

The idea to transform the property is still in its early stages. For now, the plans have only gotten as far as a conceptual rendering and the creation of the Shoppes at Scott’s Addition name. Blum said no developer or architect has yet been selected for the site.

Blum could not say how much it might cost to develop the property. He did say he and the landlord are considering selling, tearing down and rebuilding or using historic tax credits to renovate the site.

“A lot hinges on historic tax credits,” Blum said. “It really just depends on the tenant interest and who we have.”

What is the building’s history? What was it’s use before bingo hall?

I think that this is a great idea for the area. But could we please retire the ridiculous “shoppes” spelling??? The faux English Village nomenclature should be reserved for the exurbs, not an actual historical neighborhood.

Someone please name a national retailer that wants a 8100 plus square feet space? GreatClips/Check City? This space is tiny for any real national stores but yes it’s design is cool. Local brewery pub would be ideal.

This side of Broad house tons of vacant (and larger) spaces including the entire 1st floor of the 3600 Center (Seaboard Bldg), and closed office/retail space of Sea Dream Leathers, and others.

Great idea. And I agree with Ethan on all the Shoppes and Ye Olde nonsense.