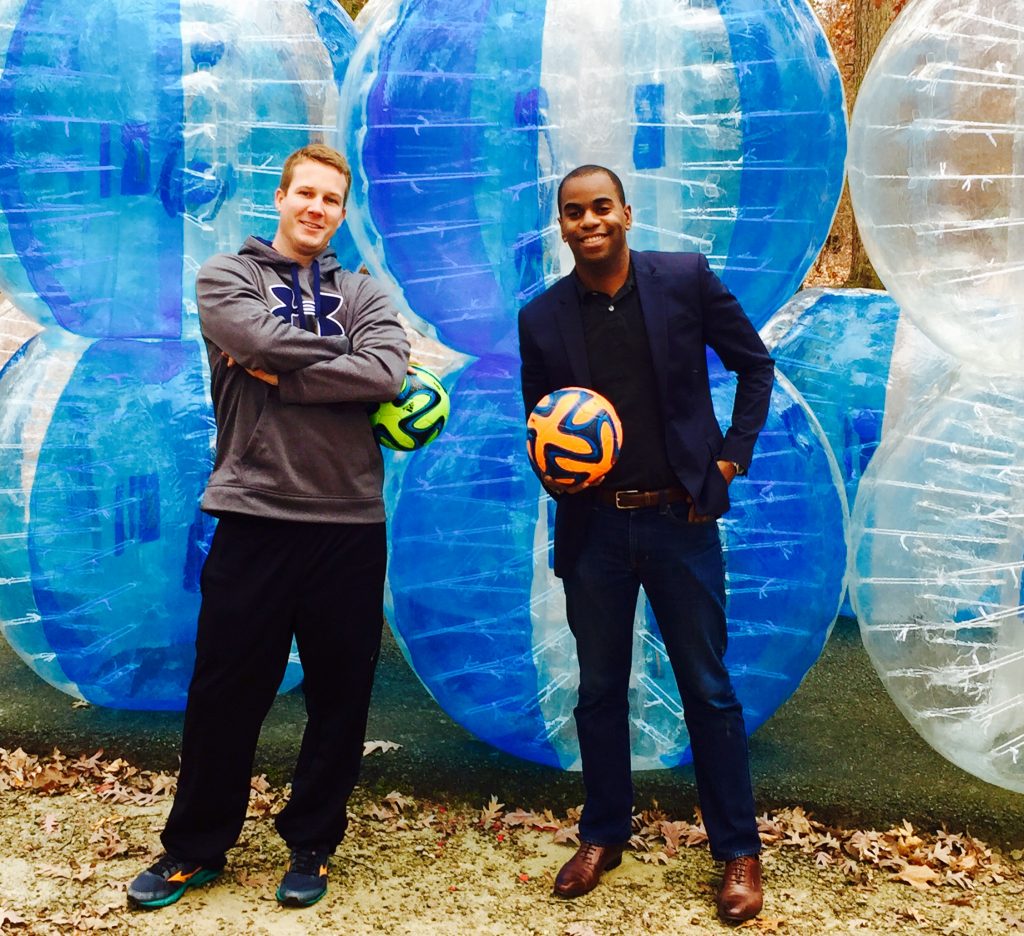 A quirky take on soccer has given rise to another local startup.

Samuel Anderson and Kyle Taylor have launched Richmond Bubble Soccer, the second local company to try to capitalize on what they say is an increasingly popular sport.

Bubble soccer players wear large, inflated bubbles over top half of their bodies, leaving their legs free to kick the ball. The result is a bubbly chaos that leaves more players ricocheting off one another than scoring goals.

“This is a unique sport,” Taylor said. “It’s hilarious to watch and be part of.”

After investing thousands of dollars and armed with bubbles, soccer balls and inflatable goals, Richmond Bubble Soccer is targeting the event crowd at churches, schools, birthday parties and corporate gatherings.

“We set up the bubbles, we’ve got goals, balls, a score board and a full-service staff,” Taylor said. “It’s the whole shebang when we arrive.”

For now, that staff consists of Taylor and Anderson, who were college buddies and fraternity brothers at Longwood University in Farmville.

They got the idea for a bubble soccer business in Richmond when they heard about the sport from a friend who had seen it in North Carolina.

“We were like, holy smokes we need to have this in Richmond,” Taylor said.

They said the sport started in Europe, spread to Australia and is starting to grow in popularity in the U.S.

“A lot of the major cities have leagues,” Anderson said. “It’s just now catching on.”

The pair has been working to book a steady stream of events, running the business in between their day jobs. Anderson, 30, is a project manager at Civitas Health Services. Taylor, 29, is a real estate agent with ReMax Commonwealth.

Around Richmond they hold events at Ozone, an activities complex in Hanover, and River City Sportsplex, a turf facility in Chesterfield.

They’ve also had luck outside of the region, with events on the books in Virginia Beach, Lynchburg and Yorktown.

“What I thought would be the most difficult part is getting the word out there,” Taylor said. “But right now all we’re doing is Facebook, social media and our website, and it’s starting to snowball. It seems like every time we hold an event, someone tells someone about it and we get another call.”

Their focus on events rather than leagues is what Anderson and Taylor believe will give them a competitive edge against the other bubble soccer-related business in town, as well as the crowded industry of organized sports leagues.

PlayRVA owner Mike Damon said the company held a pilot run for its bubble soccer league at Richmond Volleyball Club and had about 10 teams. It is now working on getting more leagues up and running and currently looking for venues.

PlayRVA does some corporate and charity events but focuses mostly on leagues. It also plans to eventually add other sports leagues under its brand.

For now, Anderson and Taylor’s fleet of 13 bubbles gives them enough equipment to handle their schedule of events. But they’re looking into smaller bubbles to tap into the potentially lucrative kids market.

“That’s going to be a big niche,” Taylor said. “Nobody is capitalizing on the market for younger children.”

The bubbles they have now are too big for most kids under 13, and they said they’ve noticed children’s interest at their events.

“The kids are just going crazy and getting upset they aren’t big enough to play in these,” Taylor said.