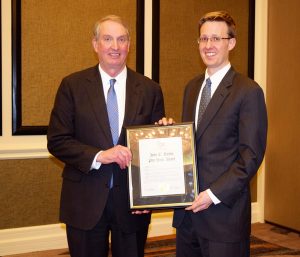 Jack Robb (right) was recognized by the Richmond Bar Association for his pro bono work.

John M. “Jack” Robb III, an attorney with LeClairRyan, was the 2015 recipient of the John C. Kenny Pro Bono Award by the Richmond Bar Association.

LeClairRyan was named the Virginia State Firm of the Year by Benchmark Litigation for the third time and was recognized at a banquet on Jan. 29 in New York City.

James Patrick Guy II, an attorney with LeClairRyan, was chosen to serve as the 2016 President of the Virginia Bar Association at its 125th annual meeting in Colonial Williamsburg. 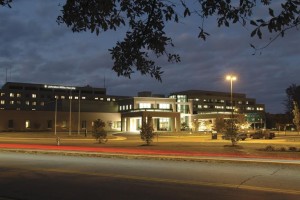 The American Diabetes Association was awarded a $97,840 grant from the Anthem Blue Cross and Blue Shield Foundation to bring diabetes education to high-risk communities in central Virginia.

HCA Virginia Henrico Doctors’ and Johnston-Willis hospitals have started offering an automated breast ultrasound system for imaging women with dense breast tissue, making them the only hospitals in Central Virginia to offer the option.

Locally based Kaleo, a pharmaceutical company, has started a partnership with the Clinton Health Matters Initiative to cut prescription drug-related deaths in half. As part of the partnership, Kaleo will make its auto-injector, EVZIO, which is used in emergency treatments of opioid overdose, available at discount rates to colleges and universities.

On Jan. 31, a group of 40 healthcare providers participated in crisis resource team training at Advanced Orthopaedics in Richmond. The team examined work practices for vulnerabilities before an adverse event occurs in order to develop effective and reliable performances among surgical team members under high levels of stress.

Tarshae Robinson-Coker and Karen Roesser, two Johnston-Willis Hospital nurses, were recognized for their significant contributions and excellence in the field of oncology care by the Oncology Nursing Society.

Dominion Resources provided a $75,000 donation to support the Richmond Symphony’s Voices of Survival concert in late January, done in partnership with the Carole and Marcus Weinstein Jewish Community Center and the Virginia Holocaust Museum. It included an extensive exhibit at the Holocaust Museum and took place on International Holocaust Remembrance Day. 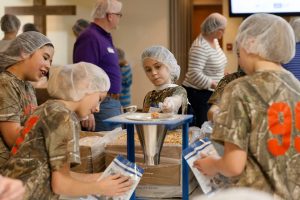 The Virginia Home for Boys and Girls will receive a $50 donation for each new client who presents a savings coupon upon service with Peoples Income Tax. Donations will be used to purchase school supplies, sporting goods and personal hygiene items for the organization’s youth.

Volunteers with the Gayton Baptist Church and Feed My Starving Children prepared 150,000 meals on Jan. 31 and Feb. 1.

The Children’s Home Society of Virginia will turn 115 this year. It celebrated the event Feb. 6 with a party in which it invited some of the 13,000 Virginia children it has placed into permanent, adoptive homes since it was chartered by the Virginia General Assembly in 1900.

The Richmond Ballet’s production of Don Quixote will include two guest artists from the world-renowned National Ballet of China, Wang Ye and Ma Xiadong.

The Call Federal Marathon Jr., a Richmond organization by Sports Backers, was recognized as having the best youth running event in the country at the annual Running USA industry conference.

Virginia Commonwealth University will no longer require applicants with a grade point average of 3.3 or higher to submit SAT scores. The move follows a national trend toward relying more on the GPA as an indicator of student success.

The Collegiate School celebrated the second time Russell Wilson played in the Super Bowl with a Russell Wilson Spirit Day on Jan. 31 with the Centennial Service Day to benefit hunger-relief charities Stop Hunger Now and FeedMore.

The University of Richmond was selected as one of the Princeton Review’s best colleges in terms of academic preparation, affordability and career opportunities.

Paul Trible, co-founder and CEO of Ledbury, will be a guest at the C-Suite Conversation, unscripted interviews with regional business people, Feb. 18 at the University of Richmond’s Robins School of Business. 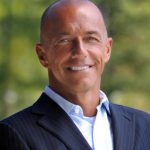 Mark Fernandes, chief leadership officers with the Luck Cos., was named one of the 2015 Top Thought Leaders in Trust by Trust Across America, the second time he has been given the title.

Martin’s Food Markets was named the official supermarket of the 2015 UCI Road World Championships, a nine-day cycling event to be held in Richmond in September.

Liberty Property Trust hosted eight local logistic companies at its RVA LogistXGames, a competition created to test teamwork, talent, efficiency and speed of logistics teams. The event was held at Liberty’s newly opened 129,660-square-foot industrial building in the Eastport Business Center. The event was done in partnership with CBRE | Richmond, the Community College Workforce Alliance and the Virginia Port Authority.

Locally based Virginia Business Systems recently acquired Apex Technologies in Chesapeake, a move that will enhance the company’s presence in the Hampton Roads market, according to a news release.

Ashley Nedza Jones, a former project designer, is now a licensed architect with Baskervill Architects. Jones will work as a project architect in the corporate, financial and higher education studios with Baskervill.

John Michael Currie, vice president of Baskervill Architecture’s healthcare group, is now a Master Black Belt in the Lean Six Sigma, which will allow him to design highly functional, yet streamlined spaces that promote and prioritize the healing process.

Robert S. Mills, principal with Commonwealth Architects, was elevated by the American Institute of Architects to its College of Fellows.