Hohner Inc. operates out of a space on Technology Park Drive.

A Northern Henrico-based musical instrument distributor has been acquired and will eventually close its office and warehouse off Brook Road.

Robinson would not go into detail about the terms of the acquisition. Hohner President Clay Edwards could not be reached for comment on the deal. 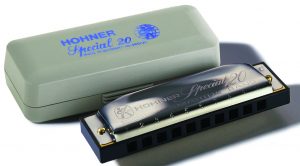 Hohner Inc.’s parent company is a manufacturer of harmonicas, among other instruments. Image courtesy of KHS America.

“We were mid-size before this acquisition,” Robinson said of KHS. “This probably tipped the scales to being a larger company in the U.S. market.”

Hohner has about 50 employees at its 55,000-square-foot office and warehouse in Glen Allen, according to its website. Robinson said the site will eventually be closed but could not say when. Some Hohner employees will relocate to Nashville and others will be laid off, but Robinson could not give exact figures.

“We’re not exactly sure when, but ultimately that facility will be closed down,” he said. “A large percentage of the team will be relocating to Nashville, and for those that are not coming, we made our best effort that everyone had a soft landing.”

Hohner has owned the Technology Park Drive property since 2000, according to a Henrico County record. Its most recent assessed value was $3.85 million.

“It will be sold sometime after closure of operations,” Robinson said. “Since we don’t yet have a specific date for that closure, all we can be sure of is that it’ll be sometime in 2016.”

Robinson said much of KHS’s business has come from distributing instruments to schools. The acquisition of Hohner expands the variety of brands that KHS can distribute to non-school oriented music stores, also known as combo shops.

“With Hohner it probably gives us a stronger presence especially on the combo side,” Robinson said. “We only had the one brand, and now we have a multitude of brands.”